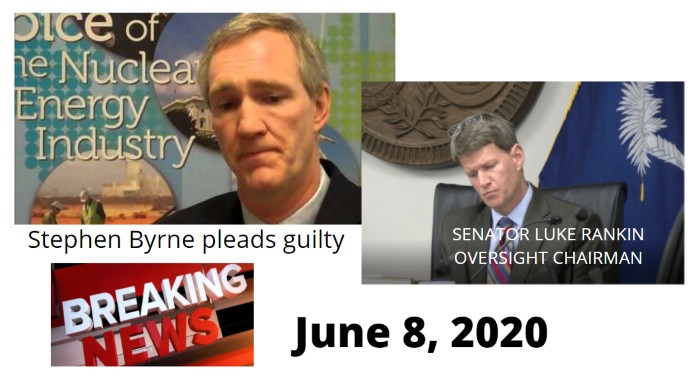 Senator Luke Rankin was the oversight Chairman of this failed nuclear plant project. His team approved the funding and oversaw the effort. Santee Cooper and Scana, together, lost $9 billion under Luke Rankin’s oversight efforts. Agreements to plead guilty began today.

As the State News reports today:

The number two executive of the defunct SCANA Corp. — whose top officials engineered the biggest business failure in South Carolina history: the $10 billion V.C. Summer nuclear plant fiasco — has agreed to plead guilty to criminal conspiracy fraud charges in connection with the nuclear failure, according to a document filed Monday in U.S. District Court in Columbia.

The upcoming guilty plea of Stephen A. Byrne, 60, is a centerpiece of a Monday filing involving his alleged criminal actions. He will need to have his guilty plea formally accepted by a U.S. District Court judge before it becomes official.

Byrne is charged with conspiring to commit mail fraud, the document said.

The document is a motion requesting a stay in a Securities and Exchange civil fraud lawsuit against Byrne and SCANA’s former CEO, Kevin Marsh. That civil lawsuit was filed in February. One big difference between civil and criminal proceedings is that in a criminal proceeding, a defendant can be subject to a prison term.

The document alleges that “through intentional and material misrepresentations and omissions, Byrne and others deceived regulators and customers to maintain financing for the (nuclear) project and to financially benefit SCANA.”

The Monday filing said there is “an ongoing criminal investigation” and indicated more criminal charges against other former SCANA top officials may be in the offing.