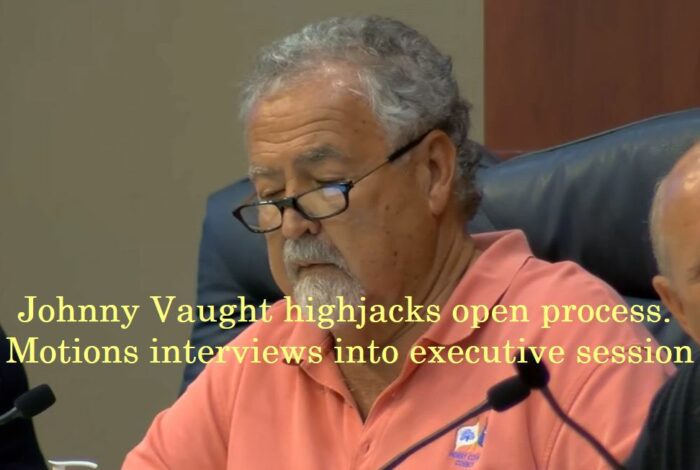 Working with the Beach Coalition, we will stop their supply line and cut off their funding. Despite resident efforts to get accountable government, these tax subsidized coastal insiders continue to work behind the scenes with ongoing push back to maintain the status quo.

It is nothing more than tax welfare for the entitled rich. Help us put an end to this elitist power grab, tax subsidized circus – find out more here: https://myrtlebeachsc.com/beach-coalition-donation

Minutes into Wednesday’s Horry County Council public interviews for a new County Administrator, Councilman Johnny Vaught made a motion that the process be moved to private, executive session. He wanted candidates interviewed just out of public view.

South Carolina attorney Jay Bender, who specializes in the Freedom of Information Act, states that this vote and the subsequent interviews were conducted illegally.

As WPDE reports: According to SC FOIA law, an agenda for regularly scheduled, or special meetings, must be available to the public at least 24 hours prior to the meeting. Once an agenda is posted, no items may be added to the agenda without additional 24-hours notice to the public, which must be made in the same manner as the original posting, according to the law.

Horry County residents were quick to make their frustrations known about the private process. Residents spoke out at the meeting and all across social media.

After the meeting Rich Malzone posted the following: June 26. 2019 Gentlemen of the council; In November of 2018 the county residents voted for change. Part of that change is transparency. You seemed to have missed that signal. The residents are fed up with back room deals, tourist lobbies, real estate lobbies and the shenanigans that make Horry County the butt of jokes statewide. Chairman Gardner is trying hard to keep OUR government transparent for the residents. While you all (except for Mr. Allen) seem to married to continued back room deals. That must stop. The residents wanted to know about and hear from all five candidates, not just the one some of you pre-determined should be hired. I suggest you revisit the definition of transparency and start acting in the transparent manner the residents expect. If you cannot be transparent you should not be on council. Cc: Council, Media, Various Social Media

Gardner – A Chairman in name only

Councilman Johhny Vaught and nine other councilmen sent a clear message to Chairman Gardner and all Horry County residents. Gardner is currently Horry County Council Chairman in name only. He and councilman Al Allen were the lone two councilmen voting for open and transparent interviews.

Despite last Fall’s election, certain Horry County Councilmen, the former administrator, the current county attorney, the real estate lobby, the tourism lobby and other coastal insiders have done all possible to undercut the will of the electorate and circumvent real change from happening in Horry County.

The drama they display for all State of SC residents to witness is an ongoing embarrassment.

A DEMAND FOR CHANGE WITH TEETH!

With over-development, coastal flooding, private agendas (I-73), TDF (tourist tax) monies not accounted for, local residents being taxed to fund the few, intra-governmental funding wars, beach bacteria, poorly run government with horrible planning, and with most everything done just out of public view – we’ve all had enough!

MyrtleBeachSC has certainly had enough as well. Horry County residents know who we are and who we are affiliated with. After today’s drama, we reached out to the Beach Coalition.

After working in scores of elections to get resident minded officials in office, MyrtleBeachSC news, like most residents, is deciding to step it up.

Working with the Beach Coalition, we will stop their supply line and cut off their funding. Despite resident efforts to get accountable government, these tax subsidized coastal insiders continue to work behind the scenes with ongoing push back to maintain the status quo. It is nothing more than tax welfare for the entitled rich.

State, County, and City representatives consistently work exclusively for them.

These coastal insiders own little of the product they rent oceanfront, however. Individually owned condo unit investors and time share owners are being soaked by the same local government working with this same group of insiders who circumvent the will of the electorate for their own private financial (tax funded) gain.

Working with matching funds from a nation-wide effort by the Beach Coalition, local residents can give here: https://myrtlebeachsc.com/beach-coalition-donation/

We will begin dropping untold mailings to these homeowners, shutting down these insider’s supply line and cutting off both their revenue and their city’s revenue.

It is time the county put its foot down. It’s time we became as organized as they are.

Our combined goal is to immediately raise $200,000 and by GOD we will raise it.