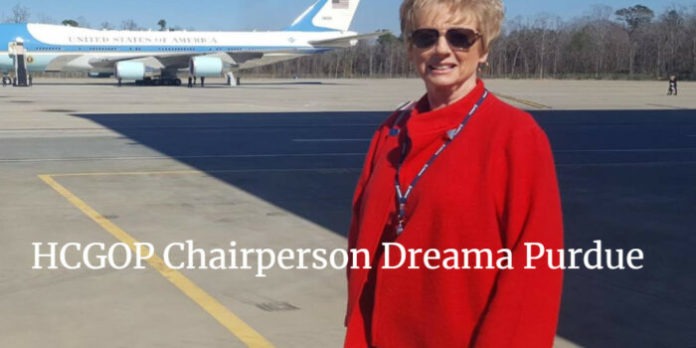 Murrells Inlet, April 8, 2019 – Steve Hoffman has announced his intention to endorse Ed Carey for the new Chairman of the Horry County Republican Party. The Party will have its biennial convention this coming Saturday at the Ten Oaks Middle School in Carolina Forest where new party officers will be elected.

Steve has stressed the need for a positive campaign that will unite all factions of the Republican Party within Horry County and even has kind words for the previous Chair and Vice Chair; “Dreama and Gerri were indeed the “Dream Team”. I want to personally thank Dreama for stepping up to the plate as Chairman after Robert Rabon could not seek reelection two years due to health reasons. Dreama had experience in the party as the treasurer under the Rabon administration and she had years of experience with the National Federation of Republican Women. And her running mate, Gerri McDaniel is probably one of the best political organizers and campaigners in Horry County, as verified by her outstanding performance leading the Trump for President Campaign in Horry County.”

However, Steve adds; “it soon became readily apparent that there was trouble in River City. Attendance at both membership and executive committee meetings began to decrease. The five standing committees directed by the HCGOP By-laws remained unfilled. After I became Vice Chair of the Party my goal was to at least get the By-Laws Committee and the Planning & Operations Committee formed, which I established in short order. Also, strategic planning, budgeting, and public relations activities were overlooked and basically non-existent during these past two years.”

Steve emphasizes that; “During normal times, these issues would not be too
alarming since as everyone seems to believe; “We are a Red State, a Red
County…and we will always elect Republicans”.

Ladies and gentlemen…the times they are a changing…
All you have to do is look at our neighboring states of Georgia and North Carolina where the Democrat Party has made significant inroads. Even the once solid Red state of Texas recently saw an upsurge in the number of Democrats elected to their statehouse. And then may I remind you that we lost an almost certain Republican Congressional seat down in Charleston just last year.

The Democrat Party now has its eyes on South Carolina. They are organized, well financed and one of their priorities is to turn Horry County Blue. Don’t believe me, just look at the Horry County Democrat Party web page, www.horrydemocrats.org. Their site is loaded with information on their organization, current issues, news, an events calendar packed with Democrat Party activities that are occurring each month throughout our county, and other information on how to donate your time and money to their party.

After reviewing the opposition’s web page, what you do not want to do
(repeat…do not do this) is to visit www.horrycountygop.com . Yes, it is that bad; no calendar of events, not even a tab to join the party or donate your time and/or money.”

It should be obvious to all that the Horry County Republican Party is in dire need of reform. Unfortunately, our current Chairman does not have the skills to reform the party. Worse yet, she does not have the leadership skills to get thing accomplished through people, she like to do things herself without delegating.

The effort to reform our party will take hard work and dedication from a large number of executive committee members, precinct presidents, and volunteers from the Horry County Republican community. It will take a leader who knows how to motivate people to accomplish the necessary tasks and ensure that the HCGOP can effectively counter the Democrat Party threat.

Again, I’d like to thank Dreama for stepping up to the plate during the party’s time of need two years ago, but it is now time to turn over the leadership reins to someone more capable of leading a large political organization.

That person is Ed Carey.