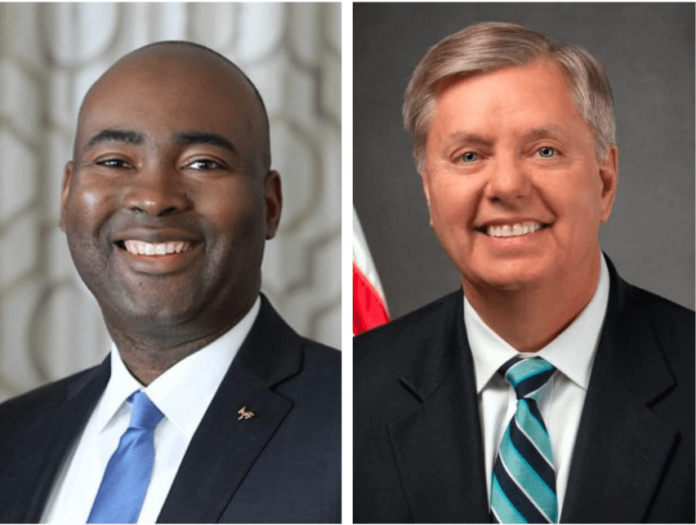 Writes the Washington Post: In a state that President Trump won by 14 percentage points in 2016, Harrison has touted his personal story of his early years living in a mobile home in rural Orangeburg to attending Yale University and Georgetown Law School as he tries to make history by becoming the first Black Democrat popularly elected to the Senate from the Deep South.

Based on his fundraising surge and consistent tight polling, a prominent independent political analyst moved the race into its “toss-up” category Wednesday.

Strategists in both parties have never viewed South Carolina as a tipping point for the Senate majority, believing that if Harrison could pull off the biggest upset of 2020 it would mean Democrats had already won many seats.

The race is tied, according to a recent Quinnipiac poll. On Wednesday, forecasters at the Cook Political Report changed their rating on the race from “lean Republican” to “toss-up.” There are now six Republican-held Senate seats marked as toss-ups. The GOP holds a 53-47 majority in the chamber.

“I didn’t think he had a chance in hell to get to where he is at,” House Majority Whip James Clyburn told CNBC in a recent interview. Harrison once worked in Clyburn’s congressional office. “He surprised the hell out of me,” added Clyburn, an established leader in the South Carolina Democratic party and a strong ally of Harrison.

While much has been made of Harrison’s Democrat party big donors, facts are Graham has raised $29 million. Harrison has brought in $28 million, although he has slightly less cash on hand than his GOP opponent, according to the nonpartisan Center for Responsive Politics. None of Graham’s previous opponents has come close to raising that amount. Graham, on the other hand, has never had to raise as much as he has this cycle. Harrison outraised him in the second quarter.