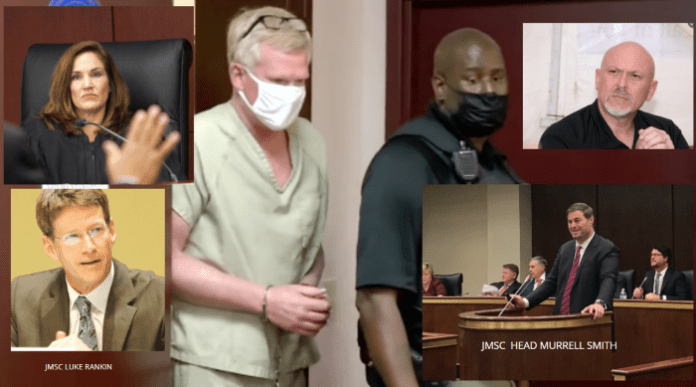 As ABC News National just reported:  A South Carolina lawyer charged with trying to arrange his own death steered the family of a housekeeper who died in his home to use a longtime friend as their attorney without revealing their friendship and then tried to take a $4 million settlement, according to the family’s lawyer.

The State Law Enforcement Division is investigating whether Alex Murdaugh or other friends or family members tried to obstruct the investigation into the boat crash as well as the questions surrounding Satterfield’s death. They also are seeing if the family was involved in a 2015 hit-and-run, unraveling the shooting of Murdaugh this month on a lonely highway and looking into millions of dollars missing from the law firm that fired Murdaugh earlier this month.

All those investigations started after the June 7 deaths of Paul Murdaugh, 22, and his mother, Maggie, 52. Investigators have released few details about the killings beyond both were shot several tines outside their Colleton County home, likely dying less than an hour after Alex Murdaugh said he came home and discovered their bodies.

HOW WAS MURDAUGH ABLE TO OPERATE IN SC THIS WAY FOR SO LONG?

One word: THE JMSC

What is the JMSC? The JMSC is South Carolina’s way of screening and, in reality, picking State Judges. Holding a seat on this commission gives select S.C. Senators and Legislators great power.

Pick the judges, write the laws and bottleneck all power.

The JMSC has maintained several constant members for over a decade. The JMSC is currently headed by Murrell Smith, a member of the South Carolina House of Representatives since 2000 from District 67 (Sumter County)

The JMSC, which has also been chaired by Horry County Sen. Luke Rankin, R-Horry, nominates candidates for the Supreme Court, Court of Appeals, Administrative Law Court, circuit and family courts. Those seats are then filled in a joint session of the Legislature. Rankin has served on the JMSC for decades and still serves today.

South Carolina and Virginia are the only states in which their legislatures play primary roles in electing judges.

Supreme court justices serve 10-year terms. Upon finishing their terms, judges are subject to re-election by the legislature

According to § 2-19-80 of the S.C. Code of Laws, family court judges are elected by a joint public vote of the General Assembly. Additionally, candidates for the Family Court must first be screened and found qualified by the Judicial Merit Selection Commission prior to being presented for election by the General Assembly. The required number of family judges and resident family judges in each of the sixteen circuits differs. These requirements are outlined in § 63-3-40. Currently there are 52 family judges.

According to § 14-11-20, Masters-in-Equity must be appointed by the Governor with the advice and consent of the General Assembly. According to § 2-19-110, upon a vacancy in the office of master-in-equity, candidates therefor shall submit an application to the Judicial Merit Selection Commission . Upon completion of reports and recommendations, the commission shall submit such reports and recommendations on master-in-equity candidates to the appropriate county legislative delegations. The county legislative delegations shall then submit the name of a candidate to the Governor for consideration for appointment. Nothing shall prevent the Governor from rejecting the person nominated by the delegation. In this event, the delegation shall submit another name for consideration. No person found not qualified by the commission may be appointed to the office of master-in-equity.

MyrtleBeachSC News broke the story on suspect Judge Carmen Mullen. Until yesterday, she was the presiding judge over the Murdaugh case. South Carolina chief justice Donald Beatty appointed a judge from outside the Palmetto State’s scandal-scarred fourteenth judicial circuit on September 22nd.

Mullen and Murdaugh previously had a complete lock on the Hampton County 14th circuit judicial system.

Murdaugh was somehow able to sue himself in the wrongful death of his own nanny, who suspiciously fell down a flight of stairs.

Legal fees of $1.4 million were paid, presumably to Corey Fleming, a Beaufort attorney and longtime friend of Murdaugh’s. Fleming was Murdaugh’s selection for being the attorney in suing Murdaugh’s estate on behalf of the nanny.

The order, dated May 13, 2019, was apparently signed by South Carolina Judge Carmen Mullen, Lawyer Eric Bland said. Bland is looking into the insurance fraud on behalf of the nanny’s sons who received no monies in the settlement.

Underneath Mullen’s signature are the words, “Presiding Judge.”

However, the signature is scrawled and not immediately recognizable as Mullen’s. Mullen resides in the Lowcountry 14th Judicial Circuit that includes Hampton County, as well as Beaufort County. The settlement was apparently done “off the books” with the insurance monies going to Murdaugh and his selected attorneys.

WHO SCREENED THIS JUDGE?

Would you believe Luke Rankin and the JMSC? You would be correct. Mullen was handy, as far as Rankin was concerned, when Rankin’s campaign manager got caught red handed in one of the state’s biggest scandals. Rick Quinn Jr. and Sr. were being pursued by Special Prosecutor David Pascoe when Judge Mullen came to the rescue and all but shut the matter down.

AND WHO HAS RICK QUINN REPRESENTED?

The Quinn family still remains among the most powerful in the state. Rankin’s role at the JMSC and Mullen’s help in shutting down the trial with a mere slap on the wrist are reasons why.

A FEW OTHER JMSC IRREGULARITIES

A Florence lawyer, H. Steven DeBerry IV, was appointed a state judgeship in South Carolina after being screened by Murrell Smith and the JMSC. Smith is Deberry’s cousin. Smith said he saw no ethical conflicts and no reasons to recuse himself. DeBerry was formerly the vice chairman of the Florence, S.C. County Council.

Judge Courtney Clyburn Pope was born in Aiken, South Carolina in 1979. She is the daughter of William and Councilwoman Beverly Clyburn. Her father, William Clyburn Sr. (Democratic Party) is a member of the South Carolina House of Representatives, representing District 82. He assumed office in 1994. His current term ends on November 13, 2022.

Pope stated she was not exactly sure what qualified her to be selected.

Former Myrtle Beach Representative Alan Clemmons is now seeking selection from the JMSC this November. Clemmons, who was first elected to the House in 2002, officially resigned his House seat on July 17, 2020. One year later – he became a candidate for the Horry County master-in-equity judge’s seat, state Judicial Merit Selection Commission (JMSC) records show.

There is nothing in Clemmons’ history that qualifies him to be a judge. He did help Horry Senator Luke Rankin win a tight 2020 reelection bid by first holding up the sale of the home of Rankin’s opponent. He lied to the opponent for months about never received escrow funds extending the sale out as far as possible. He then showed up at a Rankin press event smearing the opponent with lies.

WHAT THE MURDAUGH CASE DID

The Murdaugh case moved Columbia’s dirty colluded secrets outside of the state. This fraternal, aristocratic institution has existed since the last days of the Civil War.

Will the Murdaugh case put an end to the JMSC and the system S.C. currently employs in hiring State Judges?

The next JMSC Judicial Screenings will be held

Count on MyrtleBeachSC News to be there with cameras rolling.