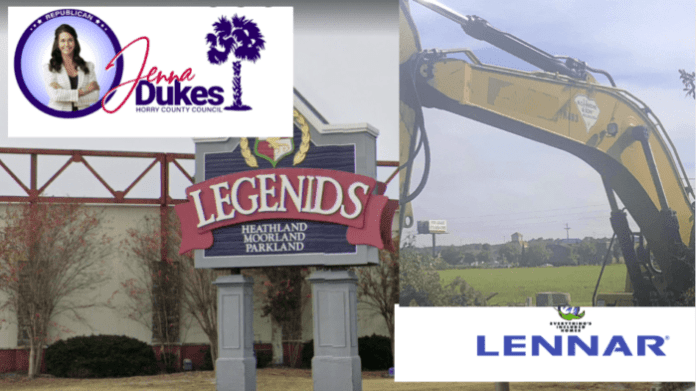 Benjy Hardee equipment is building access to a new housing development at the Legends Golf Course Community across from Tanger Outlets. Horry County planning approved 200 homes to be constructed on the previously condemned mining land.

VIDEO OF BUSY HWY 501 AND NEW ROAD ACCESS FOR LENNAR

The land was purchased by SCDOT from Dr. Hal Holmes of Conway for $18 million and then condemned. However, the title to the land never changed hands, says Myrtle Beach local Katrina Morrison.

SALE OF CONDEMNED LAND TO SCDOT

The condemned land was purchased by Lennar Homes through a deal brokered by Curtis Dukes. Curtis Dukes is the husband of incoming North Myrtle Beach Councilwoman Jenna Dukes.

Jenna Dukes defeated resident focused candidate Harold Worley in the recent June primary. She campaigned as a reform candidate opposed to deals much like this one.

A.O. Hardee construction vehicles have been working ongoing on the new development.

Homeowners at the adjoining Sago Development have not allowed Lennar access to their private neighborhood road. As such, Hardee Construction equipment is in the process of cutting a new 4 lane road from Highway 501 to the new Lennar property.

A bridge has also been constructed to work around the Sago homeowners.

Highway 501 is gridlock in this area as can be seen in the video included.

Morrison questions why a four lane access road is necessary for a development scheduled for only 200 new homes.

The wetlands adjoining the condemned mining track, also adjoins the Sago community. These wetlands south of the Sago Community have been completely ditched, dried, and drained. The large tract of land is owned by Paramount Development Corporation. Paramount is a development corporation out of Beckley, West Virginia.

When it comes to grass, turf, and soil maintenance, expert counsel recommended