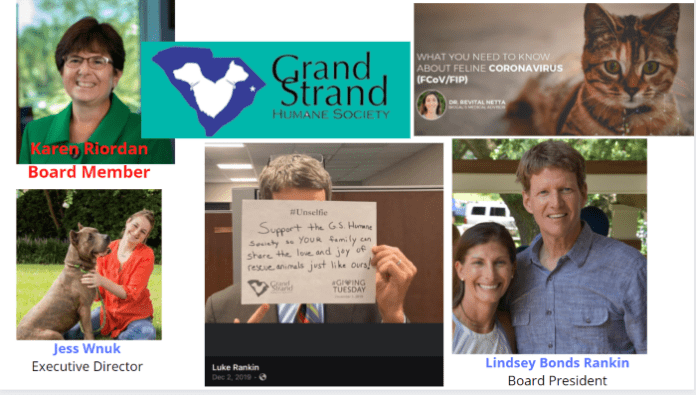 A controversial Chinese black market operation at the Grand Strand Humane Society has caused a rift between its own board and Myrtle Beach City Government. The 501c3 is located on city owned property at Joe White Avenue in Myrtle Beach.

A meeting was held between the city and the Humane Society this past Tuesday concerning this black market operation. After the meeting MyrtleBeachSC News reached out to Fox Simons, Myrtle Beach City Manager.

“We have met with members of the Humane Society board and aren’t comfortable with the shelter’s current direction.  No decisions have been made at this time, but all options are on the table,” Jonathan Fox Simons, Myrtle Beach City Manager.

“Jess – As I have always said, when it comes to saving animals, there is no one person who could match here. Sadly, members of the Board have made her omnipotent. The Black-Market drug – and argue if you must – it is a Black-Market drug. Jess purchased it “on the street” that alone makes it questionable, worse, with public funds from the GSHS account for which the invoice was mis-accounted for then the expenditure covered up.”

“Even if it were not an illegal drug – a single drug costing $11K was unauthorized and spent on seven cats, fours of which died.”

“Lindsey [Bonds Rankin] knowing about the use of the drug and not bringing it to the table and then recently untruthfully stating “monies were raised for it” is unconscionable. Lindsey and Jess both signed a petition supporting this drug in which the first line states it is illegal.”

The Grand Strand Humane Society is incorporated as a non profit 501c3. By law, these type organizations are not allowed to participate in supporting candidates for political office.

The Grand Strand Humane Society’s Board President is Lindsey Bonds Rankin, wife of S.C. Senator Luke Rankin. The Executive Director is Jessica Wnuk. Wnuk was a huge advocate for Rankin during his most recent run for political office.

Where Does Grand Strand Humane Society Get Money To Operate? From the organization’s website

A portion of our yearly funding is generously granted to us by the City of Myrtle Beach [$240,000 tax paid dollars annually]. We also hold numerous fundraisers throughout the year to raise the much-needed funds to run our organization. Our other income sources include: Adoption fees, Grants, Veterinary Clinic services such as spay & neuter surgeries, vaccinations, preventative medicines and micro chipping.

The Grand Strand Humane Society (GSHS) experimented with this Chinese black market drug which some in the FIP community claim will cure cats having coronavirus.

Records we obtained show that GSHS did purchase $11,000 of the black market drug and treated 7 cats.

Four cats died immediately. Three other cats survived. GSHS spent over $1600 to treat each cat with the black market drug. American veterinarians refuse to administer the drugs as these Chinese drugs are not FDA approved. We asked Jessica WNUK, Executive Director, “Who on staff injected the cats with the $11,000 initial experiment?” She refused to respond.

The drugs are shipped from China mislabeled as dietary supplements. This is how China gets the drugs through U.S. customs.

After news of our investigation into this article began circulating among GSHS board members, an adoption /volunteer named Sarah reached out to us. She asked that her name be kept confidential.

She stated that GSHS did experiment with the drug. GSHS decided to quit the inhouse practice.

At the December Board meeting, on the below video, you can hear Sarah’s request to allow her to outsource the black market program on behalf of the GSHS board in an effort to skirt any political or legal liabilities for GSHS. Sarah then asks for GSHS funding to purchase the drugs or GSHS’ help with finding funds for this effort.

By call, Sarah informed MyrtleBeachSC News that she and her friend Amy formed an entity to deal with these issues.

GSHS BOARD AT ODDS

Board member Sophie Mirabal resigned immediately in December at the onset of this black market operation. She called Lindsey Bonds Rankin as Board President a travesty. She stated that Lindsey’s only objectives were to protect Executive Director Jess, be self-important, pontificate and posture. She writes, “Her [Lindsey Bonds Rankin] ability to distort the truth is absolutely amazing, if not sad!.”

After these posts went up on Facebook, we reached out to Daren Watson of Whiskers Animal Rescue Sanctuary. Whiskers is a 501c3 also.

Watson, by text, referred us to the FIP Warriors Facebook page.

The FIP Warriors page has been taken down several times by Facebook. Volunteers at the GSHS informed us that Jessica and Lindsey’s contact to FIP Warriors is an online treatment salesperson named Mark Thompson. He markets and sells these FIP Treatments on his Facebook page ongoing.

Call To Us From Sarah – After We Asked Jess Wnuk (E.D.) Key Questions

NOTE STATEMENTS IN RED BELOW

Statement from University of California Davis on FIP treatment:

Our field trials are completed, and we are no longer accepting cats for treatment.  We also cannot send drugs free or for a charge as that would not be ethical.  There are now two drugs that have been researched, both showing great promise.  They are now in various stages of being commercialized, which is a complex process that involves identifying potential companies interested in taking a drug through FDA approval and licensing.  This is not a simple task and could take one to two years before one or more drug is approved and made available for use by licensed veterinarians.  We have described our experiences with GC376, a viral protease inhibitor, in an article in the Journal of Feline Medicine and Surgery. Similar reports will be forthcoming as other drugs go through experimental and field testing.  We wish that there were currently available treatments for FIP, but none have proven curative and therapy remains basically symptomatic and targeted at extending a reasonable quality of life and not to cure the infection. We are convinced based on our research that anti-viral drugs of the type currently used for HIV/AIDS and hepatitis C virus (HCV) infection will provide the best chance for curing this terrible disease of cats.  These drugs include protease inhibitors, nucleoside reverse transcriptase inhibitors, and non-nucleoside reverse transcriptase inhibitors, as well as other classes of anti-viral drugs that target specific aspects of RNA virus replication.

A number of entities, largely in China, are manufacturing GS-441524 (GS) and GC374 (GC) for sale mainly to desperate owners of cats with FIP. Some of this synthesis is by non-veterinarians and some with direct or indirect participation of people having veterinary or human health backgrounds. People in China have a great problem with FIP due to their increasing ability to keep and afford pets. There is a particularly high demand for expensive pedigreed kittens, which are at increased risk for FIP. Therefore, the Chinese interest in drugs like GS-441524 (GS) and
G376 (GC) is not entirely financial and opportunistic. Although their first effort was centered around GC, the emphasis of this black market has rapidly shifted to GS. Although this sort of marketing and use of GS and GC is technically illegal, the companies holding patents on GC and GS have no effective means to halt this black market use. Reputable drug companies that are offering GS and GC usually include a disclaimer limiting their use to research purposes only and not for human or veterinary treatments. This disclaimer, when given, has no enforcement power to owners and is being largely ignored. Drugs offered by individuals are often packaged and labelled as dietary supplements, which allows easier entry through customs control of other countries. Fortunately, this mislabeled drug usually contains accurate information on the drug concentration, e.g., 15 or 16.5 mg/ml. The recommended dosage of GS for cats with nonneurological FIP is 4 mg/kg, SC, once a day, for 12 weeks. Cats with neurological FIP may require a progressively higher dosage of 5-10 mg/kg. Veterinarians, who are under more legal and ethical constraints, may view the black market quite differently from owners of cats suffering from FIP. Some may refuse to participate beyond making the initial diagnosis of FIP, some may help with drug administration and monitoring as long as the owners provide the drug, and some may require signed waivers freeing them of any legal or ethical obligations. I respect whatever course of action veterinarians might take in interpreting their personal oaths to “use their scientific knowledge and skills for the benefit of
society through the protection of animal health and welfare, the prevention and relief of animal suffering, the conservation of animal resources, the promotion of public health, and the advancement of medical knowledge.”
We already know the problems of involving black market drugs in human medicine. Although the suppliers indicate that they are highly pure, there is no testing for biological activity (i.e., antiviral effect). We already know that GC and GS are being made by an increasing number of individuals and that the quality on a mg/kg or molar dosage may vary. We also know that the
price of GC and GS can also vary greatly and that owners can expect to pay many thousands of dollars for enough drug to complete a treatment.

Several residents raised concerns as to why the Humane Society is even allowing these cats to be adopted by the general public?  What disclosures and releases were signed when infected cats were adopted out? What lawyer reviewed and approved the disclosures and liability releases for these “infected cats” adopted owners to sign?

The fact the Humane Society is allowing cats that are infected to be adopted by the general public is a huge issue.

In Spring 2020, up for re-election in a tight S.C. Senate campaign, Senator Luke Rankin leveraged his connections to GSHS to win support and votes.

The City of Myrtle Beach and the Myrtle Beach Area Chamber of Commerce want this $300 million from the state. Luke Rankin is among the most powerful men in the Senate.

How will this divide over what is clearly a black market operation play out?

Key Question: Should 501c3’s be associated with political campaigns? By state law, the answer is clearly no.