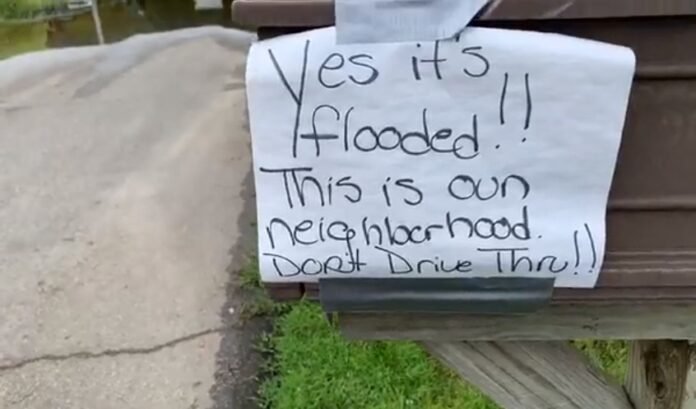 For those towns, the storm has passed. Clean up is just ahead.

Socastee, S.C. residents are bracing for the storm to come.

Every hurricane means a new cycle of floods. The entire community just experienced a flood on June 15th. Many , once again, gutted their homes to avoid mold. Everything in the home was thrown out. New carpets, walls, sofas, and flooring were required.

The community is now bracing for the next round.

In the coming days, those same homes will need gutting again as the waters start to rise just eight weeks later.

Said Rosewood resident Terri Jean, “What would you do if you bought a brand new house, and without any warning, it started to flood every year? You weren’t told you were in a flood zone (you aren’t), or that you had to buy flood insurance. This year, without any major weather events, you’ve already flooded twice. Now your house and your finances are literally under water. You can’t resell. The county officials tell you they cannot do anything to stop the flooding. They also say they have a plan and funds put aside for a buyout or elevations. But they won’t finish the process. And hurricane season has begun.”

Harriet Festing is the Executive Director at Anthropocene Alliance. The group’s core initiative, Higher Ground, is the largest flood survivor network in the country. The network is composed of 51 member-chapters from 20 states plus Puerto Rico, serving a total of 500,000 flood survivors and their neighbors. These ethnically and politically diverse groups are typically set up by flood survivors during disasters and sustained by volunteers.

Said Festing, “Families are losing their homes and money to flooding. Each hurricane forecast brings them a new variation of hell. It doesn’t have to be this way, if only the county stopped building in flood prone areas and bought out homes that are currently flooding”

The victims only options are to either sell their homes at a huge loss (if they can) or organize and collectively sue Horry County for allowing the development.

Horry County Councilman Cam Crawford told WPDE news in June. “The most prominent feature in terms of flooding would be the relocation program. So, I’ve certainly been working to advance that effort and that’s something that involves multiple levels of government. HUD, at the federal level, that’s where the funding would come from. When you have the South Carolina disaster recovery office in Colombia, they would provide oversight, and of course, they have regulations that oversee the program, and then the county would actually administer the program,”

Through Anthropocene Alliance, Rosewood neighbors are responding themselves. Their group put together the below campaign.

Help the #RosewoodStrong community get to #HigherGround. Add your voice today with our easy toolkit.

WHAT YOU CAN DO:

If you have one minute, search for the hashtags #RosewoodStrong and #RiseOrRetreat and retweet the tweets you find.

If you have two minutes, write a tweet using the hashtags # #RosewoodStrong and #RiseOrRetreat and tag @AnthropoceneAlliance, @HUDgov, and your state and federal representatives. You can write your own message or use our samples below.

If you have ten minutes, do all three!

Why should #RosewoodStrong have to put up with flooding every year, lose their property and risk their health because @HUDgov CDGB-MIT is taking their time? Help this community #RiseOrRetreat now! @LindseyGrahamSC, act! #HurricaneIsaias is bearing down on us TODAY! CLICK HERE TO TWEET NOW

[email protected], @LindseyGrahamSC, @SenatorTimScott, the residents of #RosewoodStrong deserve to be on #higherground! Hurricane season has started and they’re still waiting for justice. You have the CDGB-MIT funds! Put them to work! Help victims of #flooding today! #RiseOrRetreat CLICK HERE TO TWEET NOW

@RepTomRice, the people you represent are losing their homes and way of life to #flooding! It’s time to step up and help them get to #HigherGround. Tell @HUDgov to distribute the CDGB-MIT monies they have set aside today! #RosewoodStrong needs to #RiseOrRetreat. CLICK HERE TO TWEET NOW

#HurricaneIsaias is coming right at us in the Carolinas. @LindseyGrahamSC, tell @HUDgov right now to distribute the CDGB-MIT funding that was promised to get #RosewoodStrong to #HigherGround! They haven’t fully recovered from #Florence in 2018 yet! CLICK HERE TO TWEET NOW

How would you feel if you had flooded twice already in 2020, w/out a major weather event, had already been flooding for 5 years due to poor planning by your county and now you have #HurricaneIsaias bearing down on you?  @LindseyGrahamSC @SenatorTimScott @RepTomRice @SCGov. HELP! CLICK HERE TO TWEET NOW

Tip: To keep your tweet public when you tag a representative, put a period or a word before their twitter handle. Otherwise, it will be a private tweet.