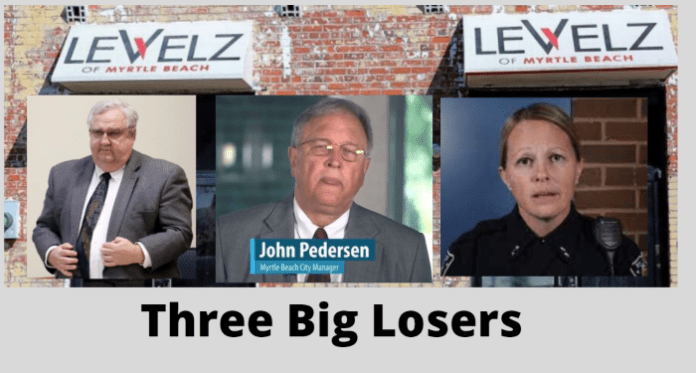 Jury awards $500,000.00 for Henry and Virginia Brewington in the Superblock city harassment case this afternoon.

Judge John reduced the settlement amount to $300,000 as a negotiated amount after City Attorney Mike Battle asked for a lower settlement based on state cap statutes.

In a landmark ruling against the City of Myrtle Beach, twelve jurors returned a judgement of $500,000.00 in damages for the plaintiffs, Henry and Virginia Brewington, at 6:35 p.m. this afternoon in the Superblock city harassment case.

The jury ruled that the City of Myrtle Beach tortiously interfered with the contract relationship between the Club Levelz Bar and Grill and Natalie Litsey.

In his closing arguments Attorney Tommy Brittain asked the jury “why did they believe the City of Myrtle Beach refused to put former City Manager John Pedersen and former City Attorney Tom Ellenburg on the witness stand?” “Because Tucker Player and I would have eaten their lunch!” said Brittain.

We reached out to Attorneys Tucker Player and Tommy Brittain after the case ended and asked what this meant for their pending Federal Superblock cases. Player chuckled and said, “You ain’t seen nothing yet.”

Mike Battle of the Battle Law firm (who represented the city) did call Myrtle Beach Police Chief Amy Prock to the stand. She first represented herself as an expert witness on nuisance properties. She claimed that Club Levelz was a nuisance property.

Under cross examination, however, her claim of expert witness fell apart. Judge John asked the jury to be dismissed. He informed Attorney Mike Battle, representing the city, that Chief Amy Prock could not be considered an expert witness.

The trial was filled with multiple missteps by witnesses for the city. Former city employees routinely answered they could not recall past events ongoing.

There are multiple SuperBlock cases now in Federal Court with millions in judgements to be awarded should the city lose those.

This case sets a dangerous precedent for the City of Myrtle Beach.

It puts those remaining cases in jeopardy as it relates to the city successfully defending each of those.