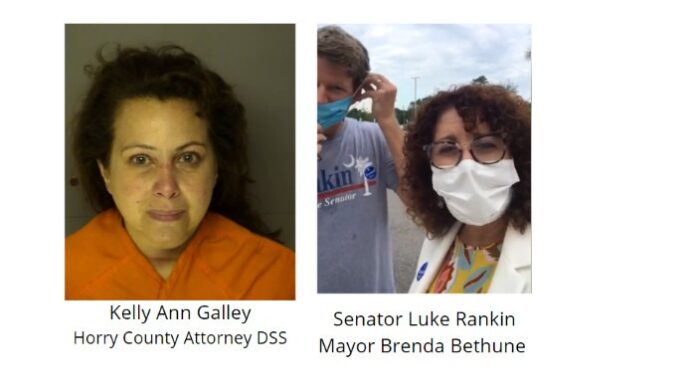 The problem with his approach was his political opponent was never once (in his entire life) charged with CDV (Criminal Domestic Violence).

Gallley is the lead attorney with the Horry county office of SCDSS.

In the Rankin team’s ongoing outcry against CDV, the political group put up a Facebook Group page with pictures of his opponent.

DSS Attorney Galley’s arrest is not mentioned and has not been posted there.

DSS is responsible for child welfare, food stamps and other social services in the Palmetto State. Galley’s role makes it possible for her to remove children from the homes of parents charged with CDV.

According to an incident report, responding officers arrived at a residential address in Myrtle Beach, S.C. at 11:17 p.m. EDT on the evening of Saturday, September 12, 2020.

Upon arrival, they observed a victim with “a deep laceration to his hand.”

The victim – whose information was redacted from the report (.pdf) – was transported to a local hospital via ambulance. Upon interviewing “both parties,” officers determined there was probable cause to take Galley into custody.

Under the S.C. Code of Laws (§ 16-25-20), first degree domestic violence is a felony punishable by up to ten years in prison.

MyrtleBeachSC News waited to publish this article. We wanted to see if this same group Concerned Women Against Abuse would post this arrest report of DSS lead attorney Galley. IT WAS NEVER POSTED.

Questions arise as to whether CDV is a real issue or just a political one for this group.

This is the 5th government employee [in the county] that we have documented as being arrested for CDV since Senator Rankin’s campaign crusade.