Almost Every Resident In District 7 Supported Trump Before Fry 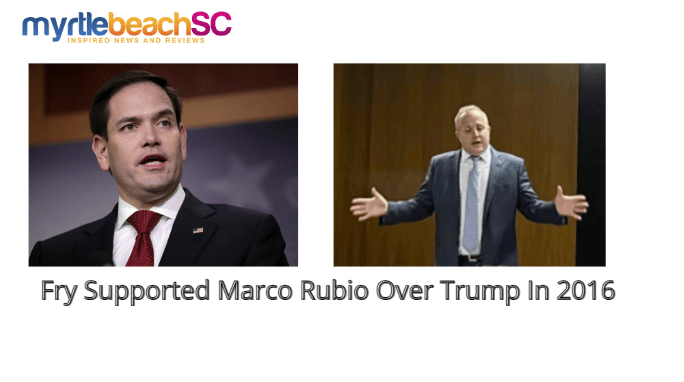 Russell Fry is the founder and president of Crescent Communications, a Myrtle Beach-based political marketing and consulting agency.

In 2016, during the midst of what is now known as the “Trump Phenomenon”, Fry and the Myrtle Beach establishment dismissed Trump’s candidacy.

Fry has been a resident of the Grand Strand for over three decades. He is also a current member of the South Carolina House of Representatives, representing District 106.

The liberal Coastal Culture runs deep inside the city. Myrtle Beach is considered a “woke city” and is the second most liberal city in S.C. just behind Charleston.

Fry has close ties to Myrtle Beach Mayor Brenda Bethune. The Mayor came out just last year stating that young children should be allowed to pick the gender of their own preference.

LIBERAL MYRTLE BEACH MAYOR BETHUNE AND FRY WORK AS ONE

Marco Rubio is a Republican Senator from Florida and a former Speaker of the Florida House of Representatives. He is also the youngest person to be elected to either of these positions in Florida

Marco Rubio was born on May 28, 1971, in Miami, Florida. His parents were immigrants from Cuba. They worked as bartenders and his father also as a hotel bartender. He attended the University of Florida and graduated with a degree in political science.

He served as Speaker of the Florida House for two years before being elected to the United States Senate in 2010. In 2016 he ran for President but lost to Donald Trump at the Republican National Convention.

With the support of true conservative District 7 voters, Trump went on to shock Rubio, Fry, and the RINO establishment winning the 2016 campaign.