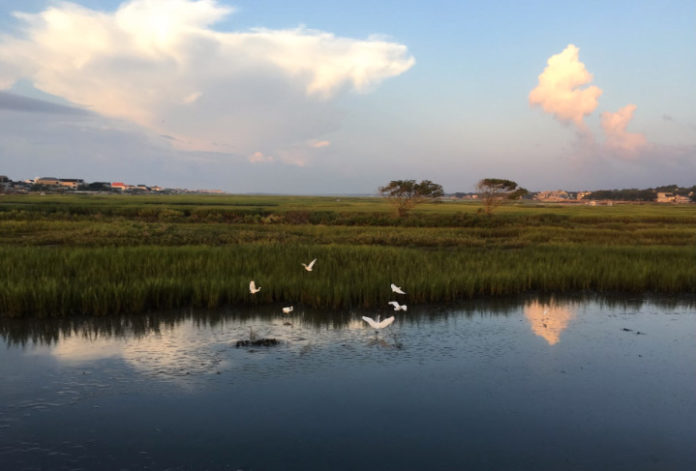 Things that are good for my soul.

Murrells Inlet is an unincorporated area and census-designated place in Georgetown County, South Carolina, United States. The population was 7,547 at the 2010 census.[3] It is about 13 miles south of Myrtle Beach, South Carolina and 21 miles north of Georgetown, the county seat.

The community was once primarily a fishing village. It has developed in modern times, along with the rest of the Grand Strand, as a tourist and retirement location. It is known for the Murrells Inlet Marshwalk, a 1⁄2-mile-long (0.8 km) boardwalk overlooking a salt marsh. Many restaurants have been developed along the boardwalk.

Pawleys Island is a town in Georgetown County, South Carolina, United States, and the Atlantic coast barrier island on which the town is located.

Pawleys Island’s population was 103 at the 2010 census, down from 138 in 2000.[6] The post office address also includes an unincorporated area on the mainland adjacent to the island, which includes a commercial district along the Ocean Highway (US Route 17) and a residential area between the highway and the Waccamaw River. The island is on the southern end of The Grand Strand and is one of the oldest resort areas of the US East Coast. The town of Pawleys Island, though, is only on the island. The island lies off the Waccamaw Neck, a long, narrow peninsula between the ocean and the river, and is connected to the mainland by two bridges, the North Causeway and the South Causeway.