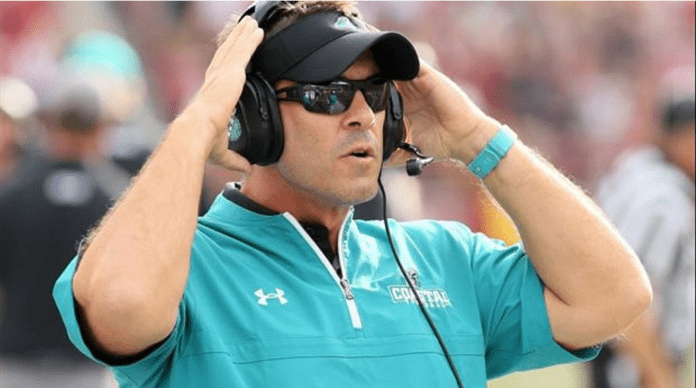 We can officially report now that Coastal Carolina’s Jamey Chadwell is among the top prospects for the TCU Head Coaching job.

Writes Blue Chip Scouting: Jamey Chadwell is likely biding his time at Coastal Carolina waiting for a big-time program to come calling. However, I don’t think that LSU or any of the other blueblood programs that could open are going to look all that close at Chadwell. TCU on the other hand is a clear step up from Coastal and would offer Chadwell stiffer competition to go up against in his quest for an eventual move to an SEC job. He won’t come cheap, but TCU should be calling Chadwell’s agent very soon.

In August 2016, TCU announced former Head Coach Gary Patterson’s contract had been extended through 2022, with an annual base salary of $4.75 million.

On November 1st, TCU surprisingly parted ways with Gary Patterson as head coach even though he had been extremely successful at the school. Though the Horned Frogs were 3-5 this season, Patterson’s firing was surprising; few saw it coming.

Maybe TCU was concerned with the trajectory of the football program the last four seasons. Since going 11-3 in 2017, the team has gone: 7-6, 5-7, 6-5 and now 3-5. Perhaps TCU had its eyes on a replacement and their need to pursue him triggered the midseason move.

Only time will tell if Chadwell becomes the next TCU Head Coach.