David Cox of Horry County Schools talks about the school board 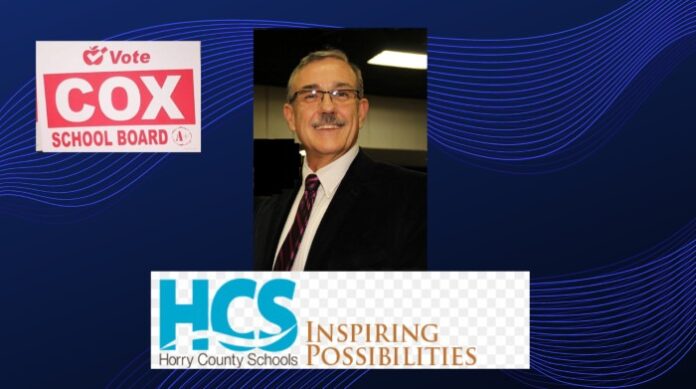 My name is David Cox and I’m running for the Horry County Board of Education in District 4. I was born In Loris as were my forefathers dating back before the Revolution. I graduated from the University of South Carolina in 1974 with a degree in Journalism.

After serving on the PTA, School Improvement Council, and School Advisory Board for 14 years, I decided to run for the school board in District 9 and was elected for two terms. I moved to Market Common and ran for the Board in District 4 in 2016, and won.

It’s quite an honor to have served Horry County Schools in two different districts, and not taken lightly.

Once I graduated from college, I spent many years in the wholesale apparel industry, but moved back to Loris in 1994 and started in the retail industry. I retired in 2018 and now sell real estate for Better Homes and Living Elliott Coastal Living.

As far as I’m concerned, HCS is highly professional organization employing almost 6,000 Horry County residents. The superintendent and his staff oversee almost 46,000 students; HCS is the third largest school district in the state. A prime example of its fluidity is the transfer from regular school to virtual school. Literally, it was school as usual on a Thursday, and a fully virtual school a week later. Think about it, 46,000 students re-directed in a week. That speaks volumes!!

This is just one example of the professionalism within the leadership at HCS. The members of the School Board are cohesive and in sync with one another. We all work well together with one goal in mind: to make HCS the best school district in the state. We are 12 individuals with 11 districts, and each of these districts has different needs.

We may disagree in the backroom, but once we are around the horseshoe we are united.

During my tenure on the school board I’ve seen the district grow by 20%; I’ve seen new schools open, and I’ve watched as our students grew and excelled in colleges and in the work force. Our charter and technical schools have grown and flourished, and even if some of our decisions were not received well by a few, they were well received by the majority.
We are facing challenges in the future that are huge, and I want to help direct the future of HCS. The budget is one topic that will require a lot of knowledge. Our base of local revenue comes via the one cent sales tax.

Since our county has been shut down for two months, the revenue is not there. It will require a lot of time and energy to address this shortfall. Another issue is the renewal of the penny sales tax. If this is not approved in 2022, the school district and citizens will be facing some tough decisions. Right now, our HR committee is in the midst of a salary study that involves every employee that works for Horry County Schools, from the very top to the bottom.

In addition, the reopening of the schools this fall will be challenging and will require experience.

Two accomplishments that I’m especially proud of involved the employees and not the students. The first one was a substantial hourly wage increase for our school bus drivers. They have to get up early and get home late; each of them has to oversee and manage roughly 200 students a day; they have to maintain a CDL license; keep their buses clean and neat, and they deserved to be compensated for the added responsibility. This was not easy because of the pay structure within the school district, and it took over a year to hammer out the details, but it was worth it.

The second thing that I oversaw as the HR chair was the sharing of sick days between employees. An employee is given 60 days sick leave, and if he or she has a sickness that requires more days, another employee can donate directly to the one in need as long as it is approved by Human Resources.

On the face of it, this doesn’t sound too difficult, but with the enormity of the work force, it is. After two years of starts and stops, we finally had a working agreement. That was very satisfying and did wonders for morale.

All of the decisions I’ve made over the years had one basic element: it’s always about the children! Their education and welfare have the focus of everything I’ve ever done while serving on the Board of Education. I really want to serve one more term. I ask for your vote on June 9th .