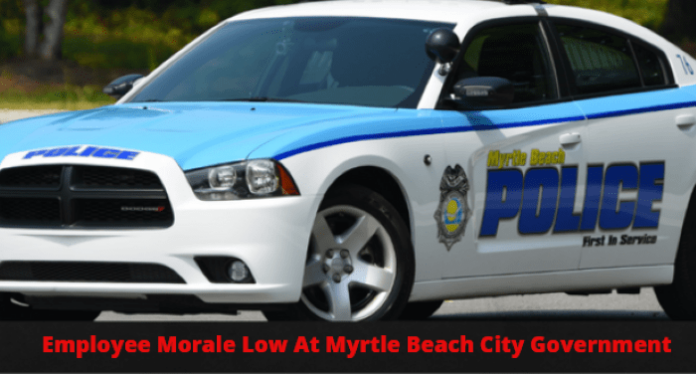 Former Myrtle Beach police officer Michael Dodd is suing the the City Of Myrtle Beach claiming he was fired over a workers’ comp claim.

The lawsuit was filed April 1st.

The suit is in process during a period when City of Myrtle Beach employee morale is at an all time low.

As MyrtleBeachSC News published in March: The City Of Myrtle Beach Employee Turnover Rate Is Three Times The National Average.

We are now being told the shortage of active police officers has ballooned to 54 total additional officers needed to police the streets of Myrtle Beach as of April 10th. This, as a rash of shootings and one hotel murder happened over the past few weeks.

Dodd began working for MBPD in September 2016 as a patrolman. He was promoted to Patrolman First Class and received a raise around the end of 2017 and beginning of 2018.

Dodd was injured in a use-of-force incident in December 2018 after a suspect fought with him, the lawsuit says.

On March 13, 2020, according to the lawsuit, Dodd saw a “NYPD” training booklet on the table and handed it to another officer in a joking way as to say “go back to training.” The other officer took the book and hit Dodd in the face with it, the lawsuit says. Dodd shoved the other officer back and the officer fell on a table behind him.

The lawsuit says the other officer said he didn’t mean to hit Dodd in the face with the book and Dodd said he reacted in the heat of the moment after feeling disrespected. Both officers moved on and worked together with no issues afterward.

Dodd was placed on administrative duty until the incident was resolved, and continued speaking with the other officer during that time, according to the lawsuit. During the investigation, the staff said they looked up to Dodd as a leader on the shift and saw the incident as isolated.

The lawsuit claims Dodd was the only officer disciplined in the NYPD police book incident.

On April 8, 2020, Dodd was fired. Before being fired, he had a meeting with the Command Staff to determine what his punishment would be and they recommended suspension.

The lawsuit claims Police Chief Amy Prock and the then City Manager, John Pedersen decided to fire him, rather than suspend him.

Pedersen would go on to later terminate more than 20 senior police officers in the Fall of 2020. Reasons given were that the cash strapped city needed to cut payroll.

Pedersen retired at the end of 2020. Multiple employees in a variety of departments within city government have called Pedersen a poor leader and a habitual liar.

Dodd said he didn’t find another job for seven-and-a-half months after being fired and had to take a position with “significantly” less income, according to the lawsuit.

The City of Myrtle Beach refused to comment on this lawsuit.