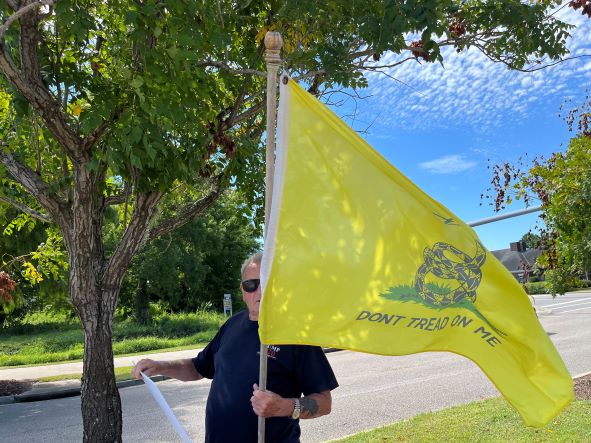 Local Horry County residents took to the streets today to protest in front of a Myrtle Beach location historically operated by the FBI.

The event was organized by Horry County’s American Conservative Voters.

“Orange Man Bad” is a narrative that began with the FBI even before former President Trump took office.

Then FBI Director James Comey infamously went after General Flynn interviewing him and entrapping him just after Trump won office in 2016.

Congress later chose to hold an investigation of the FBI’s actions. Concerning the interview of Lt. General Flynn by Comey, Oversight Chairman Trey Gowdy, a South Carolina Republican, pressed Comey on the purpose of the interview.

“It is not the FBI’s job, unless I’m mistaken, to correct false statements that political figures say to one another. So why did you send two bureau agents to interview Michael Flynn?” Gowdy asked.

WHO WORKS FOR WHOM?

“Because one of the FBI’s jobs is to understand the efforts of foreign adversaries to influence, coerce, corrupt the government of the United States,” Comey responded. “So they were sent there as part of that counterintelligence mission to try and understand why it appeared to be the case that the national security adviser was making false statements about his conversations with the Russians to the vice president of the United States.”

THE RUSSIAN COLLUSION HOAX HOUNDED TRUMP FOR YEARS, BUT ALL THE SMOKE AMOUNTED TO NOTHING

In response to protests and American concerns of the latest FBI raid at Mar A Lago, U.S. Representative Brian Fitzpatrick spoke out yesterday.

“It’s incumbent upon everybody to act in a way that’s becoming of the office they hold,” said RINO Rep. Brian Fitzpatrick (R-Pa.), a former FBI agent, “And that’s not casting judgment on anything until you know all the facts.“

The search warrant leading to the raid was made public yesterday and identifies three federal crimes that the Justice Department says it is looking at as part of its investigation: violations of the Espionage Act, obstruction of justice and criminal handling of government records. The inclusion of the crimes indicates the Justice Department has probable cause to investigate those offenses as it was gathering evidence in the search. No one has been charged with a crime at this time.

The warrant receipt didn’t detail the subject of these classified documents but did note that federal agents seized just one set marked “top secret/SCI.”

ESPIONAGE BY OUR FORMER PRESIDENT?

The problem with the main stream media, the government bureaucrats, and the Democrat party narrative is the public just isn’t buying it no matter how hard they all collectively sell it.

The FBI was largely held together by myth and propaganda with its MOST WANTED list at the onset of FBI Director J. Edgar Hoover’s leadership.

After the Bay of Pigs invasion disaster in Cuba, John F. Kennedy, in August of 1963, quietly vowed to his campaign staff that upon reelection, he would be shrinking the size and scope of the FBI and CIA. Bobby Kennedy offered his support as Attorney General in the effort to reign in Hoover and the FBI.

On June 5, 1968, Robert F. Kennedy was shot by Sirhan Sirhan shortly after midnight at the Ambassador Hotel, Los Angeles. He was pronounced dead at 1:44 a.m. PDT the following day. Kennedy was a senator from New York and the leading candidate in the 1968 Democratic Party presidential primaries.

These were the last two living politicians who attempted to openly limit the size and scope of the FBI and CIA in Washington D.C.

Myrtle Beach will get direct Northeast impact from Ian