How Red Is S.C. Really? Abortion Ban Watered Down 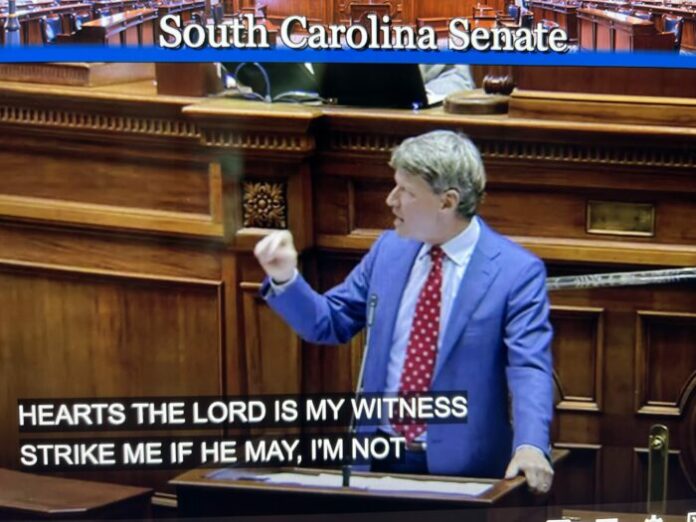 South Carolina Senate Republicans failed to reach consensus Thursday on a near-total abortion ban, quashing an effort to enact the second state law restricting the procedure since the fall of Roe v. Wade.

Divided Senate Republicans across the floor, signaled GOP troubles in getting party members behind strict prohibitions. Horry County Senator Luke Rankin made a baffling speech from the Senate Floor.

Rankin stated the bill should be put on the ballot for a voter referendum. Rankin, in previous years, has ensured that pro life legislation died in committee, never making it to the floor for a vote.

On the Senate Floor, Rankin said “God strike me if he may”. A few hours later, Myrtle Beach City Hall was struck by lightning.

It should also be noted that Senator Luke Rankin (R-Horry) decided to take a leave of absence around 15-20 minutes before Senator Massey’s Rule 15A Motion to bring the H5399 matter to a close, which may have deprived the Republicans of one of the two additional votes needed to pass Senator Massey’s motion with the required 26 votes.

However, 26 votes were required under the Senate Rules for this particular Motion. If Senator Luke Rankin (R-Horry) had not departed the Senate, he would have been in the hot spot for providing the 25th vote for Senator Massey’s Motion. Senators could have then applied pressure on just one more of the five Republicans: Davis, Gustafson, Hembree, Senn, and Shealy to convert.

Abortion on demand under 6 weeks (over 40% of the “abortions” in SC) remains “legal” in SC Senate version of H5399 because of 15 voting Democrats and these five “Republicans” voted against Senator Massey’s Motion to bring the matter of H5399 to a close.

It is noteworthy that two of the most liberal senators in S.C. are elected in Horry County. Those two liberal senators are Senator Greg Hembree, NMB and Senator Luke Rankin, Myrtle Beach/Conway.