A letter sent out by Hope Walker of the S.C. GOP this week asks three influential conservative activists to resign from their leadership positions.  Eva Long, Sharon Pollard, and Peggey Bushey are ardent Trump supporters.  They were instrumental in the key wins of District 104 William Bailey, as well as, Horry County Council Chairman-elect Johnny Gardner in local primaries this past June.

The letter asks each one to voluntarily resign from their positions as Precinct Executive Committeeman from their respective precincts.  Each, however, were elected to those positions by their peers.

MyrtleBeachSC news published these conservative women’s statements on broadcast last night.  That video has quickly gone viral locally with over 2,000 views as of 7 a.m. August 28th.

We also reached out to GOP Head Hope Walker, State Representative Alan Clemmons, Incumbent Heather Ammons Crawford, and Horry County GOP Chair Dreama Perdue (ALL PICTURED TOP ABOVE).  None returned our email requests.  Mrs. Walker was not willing to make a statement on camera either.

ONE LEADER STEPS UP 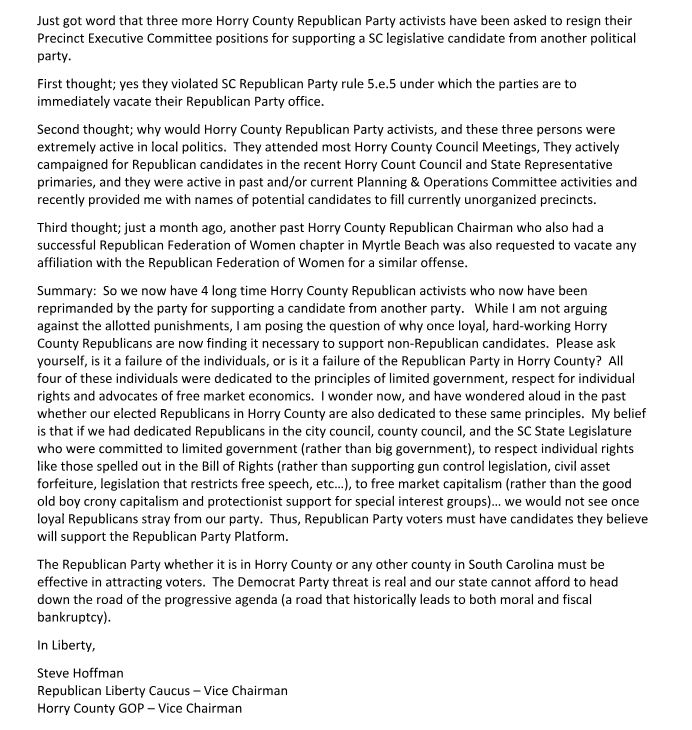 Incumbent Heather Ammons Crawford is in a highly contested battle with a local conservative Cameron Ventura for SC District 68 this coming November. This district falls largely in the Socastee voting area.

Ventura is a Libertarian Conservative running to the right of Crawford.  As MyrtleBeachSC news reported this year,  the SC conservative group, CLUB FOR GROWTH, gives Crawford a D-  record as to whether she votes liberal or conservative.  Readers can view that article here: https://myrtlebeachsc.com/horry-county-legislators-rated-ds-fs-club-growth/