The group was created to appear “grass roots”.  It currently has 393 members.

“It’s a new strategy for us, we’ll say that,” Dean told the Myrtle Beach Sun News. “Our hope is that this becomes bigger than the chamber.”  He added that the chamber intends to continue to use the page to share stories of law enforcement’s efforts, which he said are easy to overlook after a high-profile shooting on Ocean Boulevard in June.

MyrtleBeachSC.com has previously reported on the Myrtle Beach Area Chamber’s increased social media strategies.  These strategies also involve using port listeners to help build a catalog of profiles on who posts what. (A Chamber of Commerce database of sorts).  Using port listeners and trackers that can include:

If you have ever done one of those “Which State Best Identifies With Who You Are” Or “What Statement Best Sums You UP” Facebook quizs,  you have seen how these highly accurate profile techniques work.  Based on your ongoing comments, shares and likes,  these programs can collect, build, and create a social profile of how you think and where you stand on all things political, social or personal.

With $32 million of tax payer funds at their disposal,  the Myrtle Beach Chamber is most able to leverage this technology and use it for or against what ever person those in positions associated with the Chamber find most useful.

With November elections just ahead,  and Myrtle Beach Area Chamber favored incumbents at risk, City Councilman Randal Wallace told the Sun News,  “I get kind of tired of being the guy who gets punched in the face every time I turn on my computer.”   Wallace and other local PAC supported incumbents find the site a welcome opportunity to play some offense in social media.

As we have previously reported,  using surrogates to invade other social groups is another strategy currently being used by friends of the Myrtle Beach Area Chamber.  Last week, when a paying tourist customer of Myrtle Beach fell ill,  her daughter put up a social media prayer request.

Myrtle Beach locals immediately went on the offensive to discredit the tourist family who simply were reaching out for support among their Facebook friends.  It is doubtful the Lumberton, NC teen realized how many viral shares her post would receive,  but here are some comments locals put out after Brad Dean went on the  Myrtle Beach Area Chamber (MBACC) subsidized T.V. channel WPDE this week. WPDE President Billy Huggins sits on the MBACC Board. 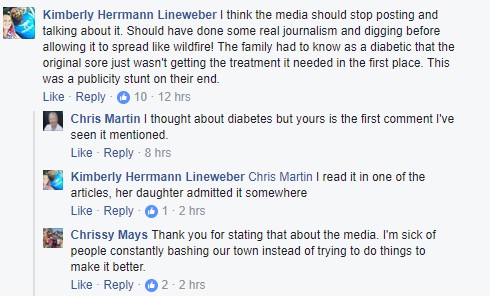 Comments that include, “This was a publicity stunt” (on the family’s end) are simply unfounded.

Election season is just ahead.  With $32 million in tax subsidies at risk,  the Myrtle Beach Area Chamber is clearly getting socially organized and prepared to fight for those who will keep the money flowing.