At the Myrtle Beach City Council meeting yesterday,  City Manager John Pedersen informed residents the city will be taking down barricades lining Ocean Boulevard this Thursday, July 27th,  by close of business.   Downtown merchants want the barricades down.  They say the fences scare off potential customers. Downtown merchants report losses of up to thirty percent this Summer.

On Tuesday, Mr. Pedersen proclaimed the barricade experiment a success.  He states that he plans to put more permanent barricade structures in place in 2018.

The promise of permanent structures has put a chill on the entire city.  A likely storm is expected in Myrtle Beach, S.C. in or around August 7, 2017.

While August has historically been a peak month for hurricanes,  the heavy storm clouds gathering over Myrtle Beach this year center around a lack of trust for Myrtle Beach city government in general and City Manager John Pedersen in particular.

Typically,  the city of Myrtle Beach is packed until the end of the second week of August when back to school activities start.  Merchants expect business to fall off on Sunday, August 13th.  The entire Summer 2017 season has been down, however.  All hotel staff we have spoken with tell us that reservations in the city of Myrtle Beach drop off considerably one week earlier than usual this year.  Currently hotel bookings are sparse starting Monday, August 7th.

Meanwhile, the neighboring beach cities of North Myrtle Beach, Surfside Beach, Garden City Beach, and Pawleys Island have each seen tremendous increases in tourism this Summer. Reservations there show no signs of an early end to the 2017 season. 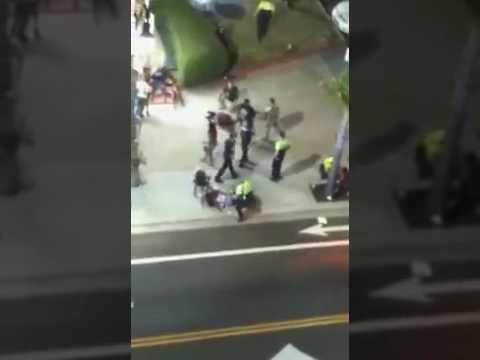 After a tourist captured a live viral video of a Myrtle Beach downtown shootout this past Father’s Day,  City Manager John Pedersen chose to install barricades on Ocean Boulevard.   The barricades were strategically placed directly in front of certain store fronts of certain merchants without any data or research from the city as to why those locations were targeted.  Pedersen claimed the barricades were in place for “safety” reasons to keep foot traffic off of the boulevard itself.  However, the barricades were not placed in front of some of the highest traffic areas that include 9th avenue north where the Bowery and the Myrtle Beach Skywheel are located.

Barricades then mysteriously re-appear after 14th Avenue,  but were not put up in front of city favored businesses like the Sea Captains House owned by hotel leader, Matthew Brittain’s family, of Brittain Resort Hotels.  Matthew Brittain is a huge political contributor in Democrat party circles and has strongly supported the campaigns of Councilmen Wayne Gray, Mike Lowder, and Randal Wallace both in personal donations, company contributions, and contributing large sums to PACs that support incumbents.

Merchants are aware that the City Manager,  who is also treasurer of the Downtown Redevelopment Commission, has designs on redeveloping the downtown areas.  Businesses, including Natalies Bar and Grill, were harassed by the city last winter and forced out of business.

It was only later revealed,  through an email released to the media,  that the city had intended to purchase Natalies all along.  The property was purchased by the city after Natalies was forced out of business.

The full weight of city services, including high-profile policing, construction services, increased fire marshal inspections, and parking restrictions were all used at different times during the city’s ongoing hostile takeover of the historic area known as the Superblock.  Three properties in the Superblock remain as hold outs, but City Manager Pedersen has been given the power, by the mayor and city council,  to use eminent domain to force a sale from these holdouts, if necessary.

All initial efforts done by the city in closing the Superblock were done in the name of “public safety”.   A chorus of  Myrtle Beach Area Chamber of Commerce subsidized local T.V. stations echoed those same concerns ongoing in support of the city’s claim.  It was only later revealed that the “safety” mantra was largely a ruse. The city wanted to buy the privately owned land all along.

Downtown merchants, who have experienced minimal business this Summer,  expect an all out “city sponsored” assault on their businesses right after the tourist season falls off this August.  Trust for City Manager John Pedersen does not exist along the boulevard.  Notable Downtown Redevlopment Corporation (DRC) board members, like Chip Smith, have sent out emails on Pedersen’s and the DRC’s behalf claiming these downtown merchants are the central element concerning downtown crime issues.  Mr. Smith has offered to present those opinions to the Myrtle Beach Planning Commission in trying to get re-zoning along the boulevard achieved.

While Councilmen Mike Lowder and Randal Wallace state they oppose the barricades,  Mr. Wallace has publicly told the media he looks forward to more permanent structures being put in place in 2018.

Elections take place this November for city council and mayor.  Every challenger running has campaigned that they oppose eminent domain and the barricades.  In short, the mayor and city council can either do something about Mr. Pedersen and the DRC or the voters will do something about changing the mayor and council this coming November.  Installing permanent barricades will upset most city residents and all downtown merchants.

Incumbents still believe they have the upper hand, however, as they have continually been able to divide and mislead these downtown merchants now for more than 12 years.

As the city continues to will the downtown area into a design it secretly hopes to create,  the Myrtle Beach Area Chamber has said nothing in support of these oppressed downtown small business owners who actually own the private land the city hopes to force them from.