UPDATE:  CORRECTION:  Feb. 21,  The city employee in the video above taking pictures,  met the man who owned the hotel after it was damaged and introduced himself as Bruce Boulineau.  The daughter-in-law of Mr. Boulineau has informed us that this is not her father-in-law. We are now in the process of determining who this gentleman (wearing the strap)  is and why a city employee would choose to lie to a hotel owner.  He drove up in a city provided vehicle.

Hotel surveillance video obtained from the Oasis Motel in Myrtle Beach shows a city Fire Marshall kicking in the railing of the hotel and quickly departing the area he just damaged.  Video also shows Arnel quizzing motel guests. The owners of the motel were not made aware that the city was on its property during the several site appearances.  The city later made a contract to purchase the motel through the city’s Downtown Redevelopment Commission.   Motel owner, Shai David, stated he sold the motel under duress in 2015.  He said the motel was physically and financially in great shape,  but leadership in City Hall made it clear he was unwelcome as a business owner in the area now in redevelopment.   Local merchants tell us he ran the most well-maintained property on the second row in that area.

Merchants are just now coming forward with evidence of ongoing harassment of their businesses,  Mr. David’s and his tenants.   All of David’s tenants, in an area called the Myrtle Beach Superblock, were either harassed by police or forced to close.  Owners of Natalia’s Bar and Grill and the Ibiza Lounge have informed us that city police made nightly multiple police checks on their properties with as many as three to five police officers raiding the property and harassing patrons asking customers what they were drinking.

Ms. Litsey, owner of Natalia’s, reports blue lights flashing for hours in front of her business this past Fall 2016 scaring off her patrons.  Superblock merchants say this was a common practice for Myrtle Beach police.  The city has since closed on many of these now shut down properties.

The Myrtle Beach Sun News reports:  The owners of the former Levelz Bar & Grill, a club that was closed in early 2015, are suing Myrtle Beach, Horry County and their former landlord, saying all three ruined their business.

Henry and Virginia Brewington, owners of the club that once occupied 515 Ninth Ave. N., said in a Feb. 2 complaint that continued police presence in and around the club was harassment. They said government officials specifically told their landlord, Melvina Divine Davis, they were a public nuisance to interfere in their agreement. The Brewingtons are suing Myrtle Beach city government for targeting them.   Davis, named in the suit, terminated their lease four years early as a result.

Below is a map of the area that the city of Myrtle Beach has targeted to purchase.

Downtown merchants say the tactics employed by the city council are suspect.   Most live in fear of speaking out as they hope to avoid also being targeted.

Mayor Rhodes, and three councilmen, including Randal Wallace, are up for re-election in November. 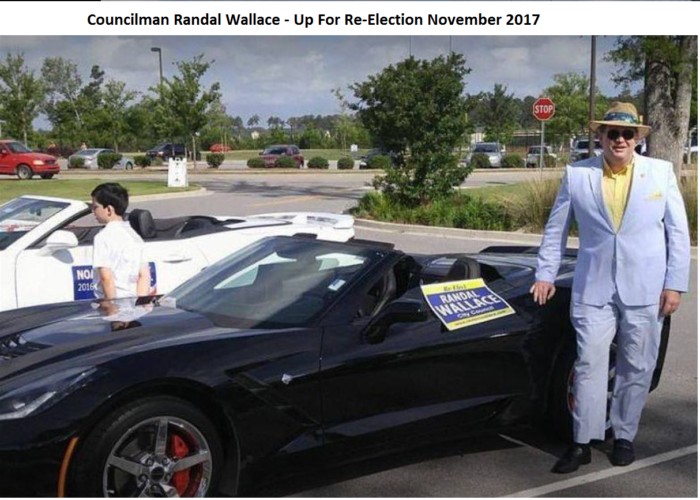