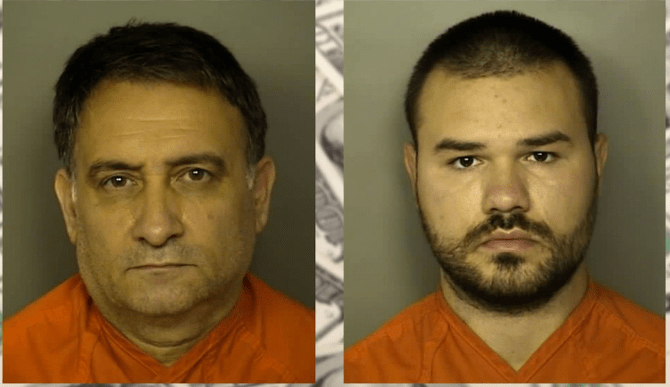 In a press release sent to MyrtleBeachSC news by the U.S. Attorney’s Office:

Two members of a Myrtle Beach family were sentenced to federal prison, and a third to probation, for their roles in a scheme to defraud the Government out of more than $500,000 by submitting false tax returns, and by stealing economic impact payments sent to others as part of the Coronavirus Aid, Relief, and Economic Security (CARES) Act. Specifically, Donna Karakatsani, 48, was sentenced to two years in prison while her son, Ivo Krasimirov Ivanov, 29, was sentenced to a year and a half in prison. Todor Milkov Stoenchev, 54, Karakatsani’s husband and Ivanov’s stepfather, was sentenced to five years of probation given his more limited role in the scheme.

“During a time when many families were struggling to make mortgage payments, this family was buying houses with money they stole from the American people,” said U.S. Attorney Adair F. Boroughs. “This fraud scheme was complex, lasted over several years, and took place primarily during a pandemic when these funds were sorely needed. These Defendants deserve their sentences, and I want to thank our federal partners who followed every lead, including interviewing dozens of foreign nationals and poring through mountains of tax returns and foreign-language correspondence. Their quick and thorough investigation also allowed the Government to recover a substantial portion of the stolen funds.”

“The sentences handed down today highlight the seriousness of the Defendants’ conduct,” said Donald “Trey” Eakins, Special Agent in Charge of the Charlotte Field Office of Internal Revenue Service (IRS), Criminal Investigation. “We will remain vigilant in identifying and investigating those who seek to defraud the American taxpayers by fraudulently using identities to file false claims for refunds.”

“Our nation went through one of the most challenging virus outbreaks in recent memory and one of our Government’s responses was establishing the CARES Act to lessen the economic impact on its citizens,” said Michael Speckhardt, Special Agent in Charge of the Office of the Inspector General (OIG), Office of Investigations, U.S. Department of State. “Unfortunately, the Defendants saw this as an opportunity to enrich themselves through a fraud scheme for which they were caught. Today’s sentencing underscores the Department of State’s commitment to prosecuting those who undermine the integrity of our programs.”

Evidence presented to the Court showed that beginning sometime in 2020, the IRS, along with Department of State OIG, began an investigation into the family regarding false claims for tax refunds and stolen refunds. Specifically, Karakatsani and Ivanov held themselves out as tax preparers and targeted foreign individuals, usually Bulgarians, who had spent time in the United States. They would recruit the foreign nationals through the internet and at various locations around Myrtle Beach. They also submitted numerous tax returns in the names of these foreign individuals, and would often cause those foreign individuals to receive refunds, primarily education credits. However, as foreign workers they were not entitled to these education credits.

United States District Judge Sherri A. Lydon sentenced Karakatsani to 24 months in federal prison, and Ivanov to 18 months in federal prison, both to be followed by a three-year term of court-ordered supervision. There is no parole in the federal system. She sentenced Stoenchev to five years’ probation. Additionally, the Government recovered approximately $380,000 of stolen funds primarily through sales of the ill-gotten property, and the Defendants were ordered to pay an additional $150,893.58 in restitution.

On May 17, 2021, the Attorney General established the COVID-19 Fraud Enforcement Task Force to marshal the resources of the Department of Justice in partnership with agencies across Government to enhance efforts to combat and prevent pandemic-related fraud. The Task Force bolsters efforts to investigate and prosecute the most culpable domestic and international criminal actors and assists agencies tasked with administering relief programs to prevent fraud by, among other methods, augmenting and incorporating existing coordination mechanisms, identifying resources and techniques to uncover fraudulent actors and their schemes, and sharing and harnessing information and insights gained from prior enforcement efforts. For more information on the Department’s response to the pandemic, please visit https://www.justice.gov/coronavirus.

Anyone with information about allegations of attempted fraud involving COVID-19 can report it by calling the Department of Justice’s National Center for Disaster Fraud (NCDF) Hotline at 866-720-5721 or via the NCDF Web Complaint Form at: https://www.justice.gov/disaster-fraud/ncdf-disaster-complaint-form.

The case was investigated by the IRS and Department of State OIG, with assistance from the Department of Treasury’s Bureau of the Fiscal Service, the Myrtle Beach Police Department, and the Horry County Police Department. Assistant U.S. Attorney Derek A. Shoemake, who also serves as the Office’s Coronavirus Fraud Coordinator, prosecuted the case.