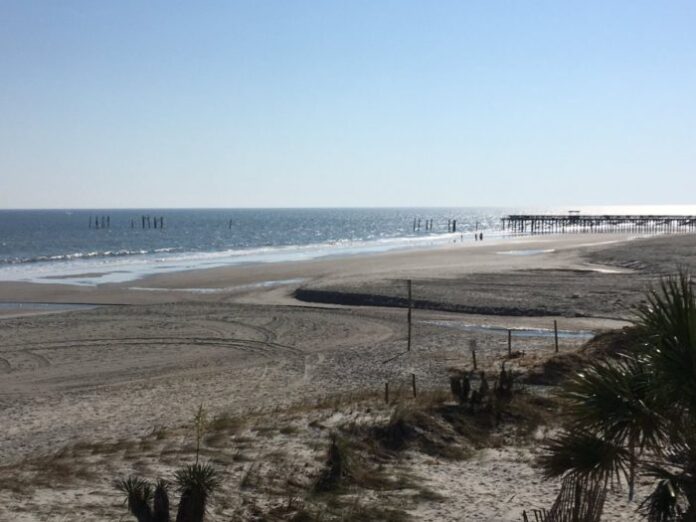 City Attorney, Tom Ellenburgh stated,”If they (the media) want to pitch a fit, let them.”

Chief Financial Officer, Mike Shelton, informed the Mayor and Myrtle Beach City Council yesterday that the city of Myrtle Beach is currently limited to a $6 million borrowing capacity.  At the annual city budget retreat, numbers showed a city that is very dependent upon tourism taxes to operate and service its debt.  Numbers also indicated that the city has reached the top end of its ability to borrow without raising taxes on local resident property owners.

City Manager John Pedersen informed council that he would suspend all currently promised pay increases for city employees until January 2018.  In hopes that the city might have an above average Summer tourism season,  Mr. Pederson indicated he would do a post-mortem review after the season ended to decide whether addtional wage adjustments promised in 2016 were possible or not. The current annual operating budget for the city of Myrtle Beach is $188  million. The budget is $50 million higher than it was just 6 years ago.  While annual spending has increased at a staggering rate,  an ongoing promise made to local property owners not to increase their property taxes has added to the debt in a city that places the largest burden of paying for government on the backs of tourists, merchants, and out of state property owners.   Those out of state property owners are our city’s largest investors and are responsible for most of the rooms rented on the oceanfront.   Each oceanfront condo owner is required to purchase an individual business license from the city of Myrtle Beach.

Myrtle Beach’s debt issues are compounded by City Council’s recent decisions to acquire private businesses in the Superblock section of Myrtle Beach for a new $10 million library and Children’s Museum.

Other items that will balloon city debt include a $5.4 million renovation of Doug Shaw Stadium that has already been contracted,  with work started,  but not funded in the budget provided yesterday.  A bond will also be issued for a $10 million Myrtle Beach amphitheater,  however, the Chief Financial Officer left it open as to how the city might pay for that item when the payments begin in 2019.  One option was to raise property taxes on local residents.

In discussions with City Councilwoman Mary Jeffcoat concerning repairing dunes destroyed oceanfront by Hurricane Matthew, Mayor John Rhodes stated, “that beach is the source of our livelihood, and regardless of whatever we do,  it has to have our number one priority.”   Despite those comments, however, City Council and the Mayor have neglected to fund fixes for 8 areas designated by the Department of Health and Environmental Control as producing toxic storm water runoff on the beach after each rain.   Those toxic runoffs have caused illnesses to tourists and locals who unknowingly swam in those areas after rainstorms in 2016.

Estimates for fixing those 8 designated oceanfront areas should cost as much as $200 million.   Environmentalists at the Coastal Conservation League tell MyrtleBeachSC.com that those budget expenditures should take precedent as this matter is one of public health.  The city has consistently stated that there is no room in the operating budget to pay for those fixes.  The city rightfully maintains it also does not have the current borrowing ability to borrow the funds to fix those areas.

With no room for borrowing, and an aggressive spending plan,  the city of Myrtle Beach is left with limited options.  Merchants and condo owners have indicated that they feel over taxed and over burdened by the current level of city obligations they are required to carry.  Tourists have also indicated that they are not fond of paying excessive hidden fees tacked onto their hotel bills at check in/out.

Merchants, tourists, and condo owners all agree that the city of Myrtle Beach has a tendency to operate in a nontransparent way.   During yesterday’s session,  Mark Kruea,  Public Information Officer, added a closed executive session agenda item to the financial meetings.   This was quickly picked up by local reporter Amy Lipman.  She then tweeted the following: 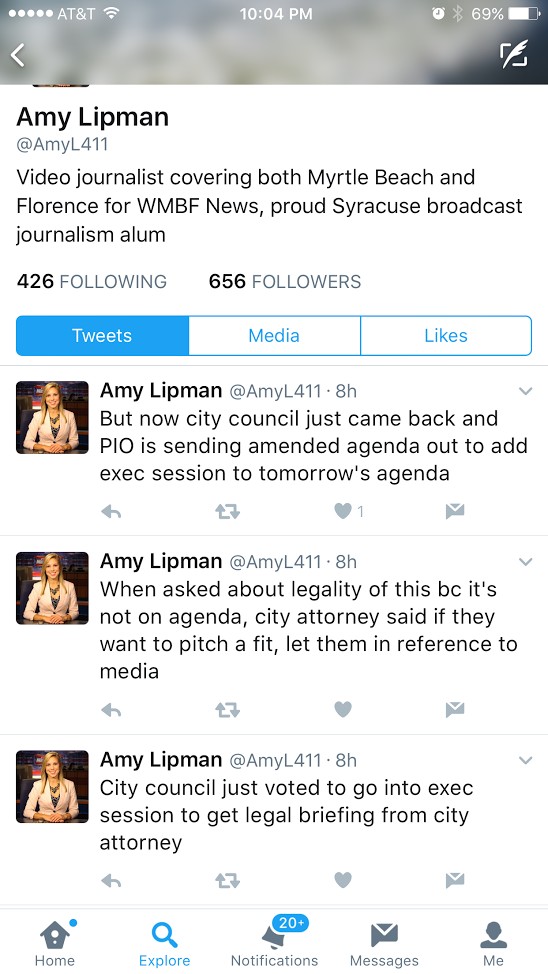 Why discussions of taxpayer monies funding the city budget need a private session by  City Council was not explained to the media.  City Attorney, Tom Ellenburgh stated,”If they (the media) want to pitch a fit, let them.”

A local group, Freedom Defense Myrtle Beach, reached out to Councilman Randal Wallace as to why this private session was required.   Mr. Wallace responded as follows: 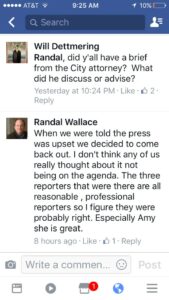