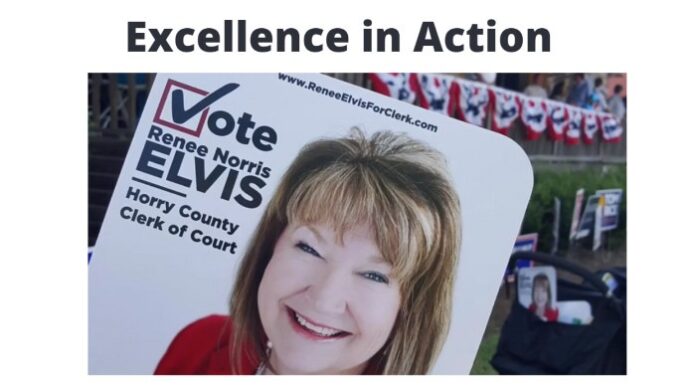 Renee Elvis is the current Horry County Clerk of Court.

Innovative, detailed, thorough and people focused are just a few of the adjectives residents use to describe Renee Elvis.

Mrs. Elvis excels at Clerk of Court for another, clear reason, however. Only those residents who, by law, are required to be involved in the Horry County court system know her name.

Those who have dealt with the court system sing her praises. Yet the Elvis’ name never makes front page news. And that is a good thing!

There are many reasons why a Clerk of Court would be highlighted ongoing in the press. None of those reasons are good, however.

Mrs. Elvis is outstanding at what she does. The fact that she never makes news is the one reason she should win this June 9th primary in a landslide. Elvis brings an excellence to Horry County government few others do.

Elvis faces an opponent, however, that is known for needing the type of attention not well suited for the job.

Mrs. Altman-Robbins produced a Facebook video yesterday, where she stated she was with her campaign manager.

In her video, Mrs. Altman-Robbins insists local voters should “vote for Angie.”

There is another Angie running for re-election this year.

Her name is Angie Jones. Ms. Jones’ name will not be on the ballot, however. She faces no opposition in the June 9th primary.

Angie Jones, Ken Richardson, and Renee Elvis are considered the most competent and professional elected officials in Horry County.

We reached out to Tom Herron to see if he was, in fact, running Altman-Robbins political campaign. His answer was no marked with an asterisk.

ANSWER:  NO*
*I’ll happily admit to designing her logo – when she showed me the design I guess perhaps executed by her “previous campaign manager” (I presume you meant consultant, right – there is a HUGE difference) I came up with the logo attached.  I think it’s pretty cute!  I’ve known the lady since I guess maybe the late 1990s when I was friends with the late Billie Richardson and Angie was working with or for Billie at the time.  I have also submitted a few MEME’s for her Facebook effort – although I believe she has actually hired a social media company.
Odd that you would contact me tonight – I hadn’t see the girl for like 2 weeks – but she drove up to the Famous Toastery in Carolina Forest just as I was leaving and gave me a yard sign and a T-Shirt!

As it relates to her opponent, Renee would never say such, but another Elvis did… “You ain’t nothing but a hound dog” became one of his biggest hits.

Political operatives, like Herron, are the very people who make unfounded claims like MyrtleBeachSC news was probably paid to publish this article.

WE WERE NOT. Mrs. Elvis has not paid us one dime and she will not be advertising with us.

Elvis is simply the best person for Clerk of Court. Her own history in the job proves such.

PUBLISHER’S NOTE: We reached out to Angie Altman-Robbins to determine whom she hired as her campaign manager.

We reached out to Mr. Smith. Smith considered the job, but after a full vetting, re-considered. Mrs. Altman-Robbins did not respond to our email request.