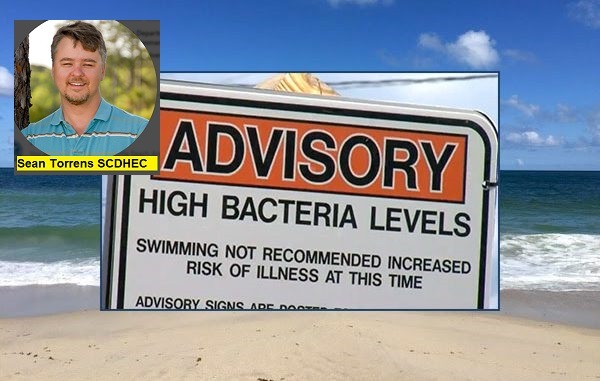 A short-term swimming advisory was issued today for the beach at the public access of 15th Avenue South in Myrtle Beach, according to a press release from DHEC (S.C. Deparment of Health and Environmental Control) . According to DHEC, bacteria levels have been detected in that area of water that exceed state and federal standards. Swimming is not advised until bacteria levels return to normal.

These advisories frequently occur after rains which send gallons and gallons of bacteria filled waters onto the beachfront.

SCDHEC official Sean Torrens is responsible for collecting bacteria samples along the beachfront in Myrtle Beach. As MyrtleBeachSC news reported this week, on Sunday, July 14th, the city of Myrtle Beach suffered a leak of 15,000 gallons of raw sewage into Withers Swash. This leak was a potential outcome with risks fully known by Myrtle Beach City Manager John Pedersen and his staff. That article can be viewed here: https://myrtlebeachsc.com/city-knowingly-puts-citizens-tourists-at-health-risk-33-of-sewer-pipes-30-to-40-years-old-leaking-collapsing/

In 2018, another broken sewage line sent 105,000 gallons flowing. The Myrtle Beach Sun News reported at that time: A 40-year-old sewer pipe broke along Canal Street on May 28, spilling 105,000 gallons of sewage. At least one-third of the sewer pipes in the City of Myrtle Beach are between 30 and 40 years old, according to the city. “I don’t know that there’s a guarantee that it wouldn’t occur again,” city spokesman Mark Kruea said. “This was a localized failure of a small section of pipe due to multiple issues. It’s very rare. We may have one instance like this per year, if that.”

We spoke to one former city employee and one former Myrtle Beach City Councilman who each told us that Myrtle Beach City government kicked the can down the road on infrastructure improvements. 33% of the storm water pipes in the City of Myrtle Beach are 30 to 40 years old or older. Many, dated from the 1970’s and older, are too small in circumference for today’s needs. Many of the current pipes, as seen above, are corroding seeping sewage into the water table constantly and especially when heavy rains occur. Multiple collapses have occurred in 2019.

Torrens and SCDHEC no longer post beach bacteria readings when a swim advisory is sent out to media. Myrtle Beach was among one of the key cities on the coast to petition SCDHEC to change the readings this year so as to no longer include an ecoli rating. The city requested and got a five year range reading metric from SCDHEC. The city informed SCDHEC that previous measurements “scare off” potential tourists.

Instead of spending monies on water and sewer infrastructure, the city of Myrtle Beach placed its priorities here:

The City of Myrtle Beach committed $6 million of tax payer monies to purchase a theater in the Myrtle Beach downtown. The property, located in the Super Block, was purchased with a promise from the city that a lease commitment (to the city) from Coastal Carolina University would accompany that buy.

A leaked memo to our news team, however, exposed Coastal Carolina University’s unwillingness to proceed with that lease deal. Taxpayers are now on the hook for a $6 million purchase of an empty downtown building. We are holding that memo in confidence to protect a source that would likely lose their job should the memo be published.

When our news story ran on Sunday concerning Myrtle Beach’s crumbling sewer infrastructure, 8 tourists sent us pictures in various degrees like the above. Most wanted their pictures and names kept out of the press.

After her mother became ill from visiting a swash area on 24th Ave. North in Myrtle Beach, Marsha Barnes Beal, posted the following prayer request to her church members on Facebook. This caused a firestorm in local media, with City of Myrtle Beach and Myrtle Beach Area Chamber officials demanding that Beal prove the infection was caused by the swash.

The attacks were overwhelming. Beal spent a month fighting the media attacks while her mother literally fought to save her life and her leg.

During today’s Wednesday Watercooler, Dave Schwartz of the Freedom Action Network and I laid out why local governments, local bureaucrats, businesses colluding with government, and locally elected officials are not legally held to the same standards as regular, private citizens. The swim advisory on 15th South was discussed.