Travel Advisory: City of Myrtle Beach only. All other Grand Strand beaches are rated safest in America 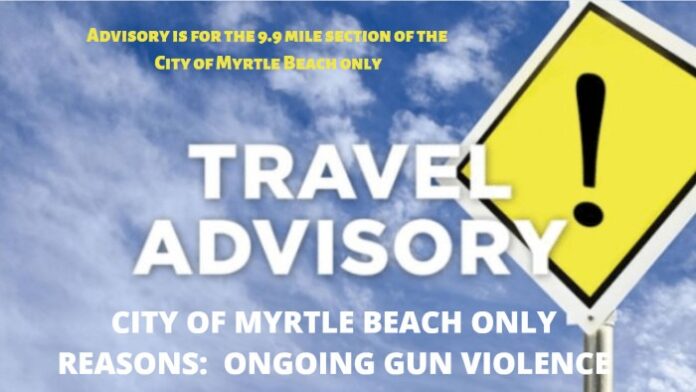 All beaches along the Grand Strand are safe and family oriented, with the exception of the 9.9 mile stretch known as the City of Myrtle Beach.

Tourists and residents of the City of Myrtle Beach awoke to this Sunday, May 17th.

As reported by the Myrtle Beach Sun News:

During an emergency Myrtle Beach City Council meeting held via conference call Monday afternoon, Prock cited a lack of communication from the business community as the reason why the events took place and why her department wasn’t prepared for the influx of tourists.

“The information we originally received was inaccurate at best,” Prock said. “It was extremely disappointing to me and my staff that the communication between our business community was lacking with our department.”

There were about two dozen golf carts seen in the video and no police present to break up the scene.

“It is my hope that we count on these relationships to be successful,” Prock said. “Communication is a huge piece for us being successful. We work together as a team to make sure our community is safe.”

As the Charlotte Observer reported in 2015: More than 800 surveillance cameras purchased for the City of Myrtle Beach https://www.charlotteobserver.com/news/local/article31604063.html

There are, in fact, 800 security cameras constantly combing the city streets of Myrtle Beach.

The Myrtle Beach City Council is comprised of 2 business members who hold significant standing in the tourism industry.

City Councilman Mike Lowder owns one of the most prestigious hotel security firms in the area.

Yet, with these two serving council, Chief Prock still made these remarkable claims of “no support” and “poor communication” from among these two business owners.

The Sun News also reported: City Manager John Pedersen added the city’s occupancy rate was much higher than originally expected. He also advised visitors to call the police if they feel their safety is in jeopardy instead of taking to social media with several videos and posts going viral depicting the weekend’s events.

The Myrtle Beach City Manager John Pedersen’s remarks about tourist/resident action are in sharp contrast to those of the Chesterfield, S.C. County Sheriff’s office, where one key gang member was arrested this week.

Sheriff Dixon stated he would like to thank the citizens who provided tips in the capture of Dennis Dashawn Stewart.

That figure includes 58 Myrtle Beach police employees, an agency that has routinely hidden behind federal guidelines to deny saying how many officers have tested positive for COVID-19. It’s the same agency that is holding retirement parties in close quarters despite orders from the state that bar gatherings of three or more people.

As of Friday, there are 44 city employees currently quarantined for the COVID-19, according to a letter City Manager John Pedersen wrote and provided to The Sun News. There are 48 other employees that were quarantined, but have returned to work.