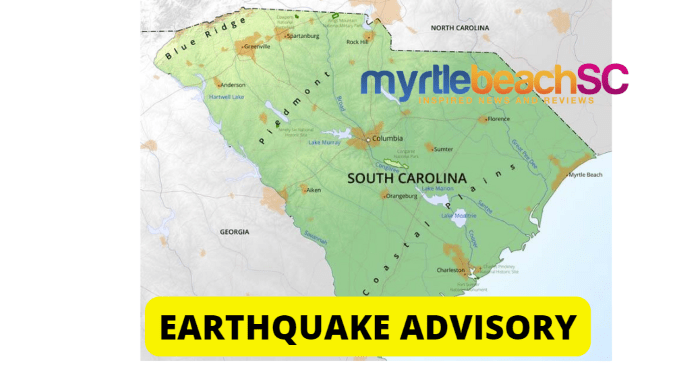 The U.S. Geological Survey has issued an Earthquake advisory for central South Carolina.

In a press advisory submitted to MyrtleBeachSC News today:

ELGIN, South Carolina — The USGS is providing scenarios to estimate the chance of larger earthquakes as part of an ongoing swarm in the region.

An earthquake “swarm” refers to a prolonged sequence of earthquakes that lacks any clear primary event or mainshock, in contrast to an aftershock sequence where a large mainshock is followed by a decaying sequence of (mostly) smaller earthquakes. Swarms can keep the earthquake rate elevated for a few days to many months. It is generally not possible to predict how long an ongoing swarm will last until it has run its course and it’s impossible to predict the size of the largest earthquake in the sequence.

This area has a history of occasional small, scattered earthquakes, but none of particularly large magnitude. The largest earthquake within 50 miles (80 km) was in 1913 in Union County, when a magnitude 5.5 earthquake struck about 90 km northwest of the recent earthquakes. That quake caused damage to brick and stone buildings, destroyed chimneys, and displaced furniture in homes. The most damaging earthquake in South Carolina history was the magnitude 7.0 1886 Charleston earthquake, located about 87 miles (140 km) to the southeast of this current swarm.

The USGS provides scenarios that are based on the assumption that the rate of smaller earthquakes remains roughly the same over the next month.

To read more on the scenarios, visit: https://usgs.gov/news/state-news-release/earthquake-advisory-central-south-carolina