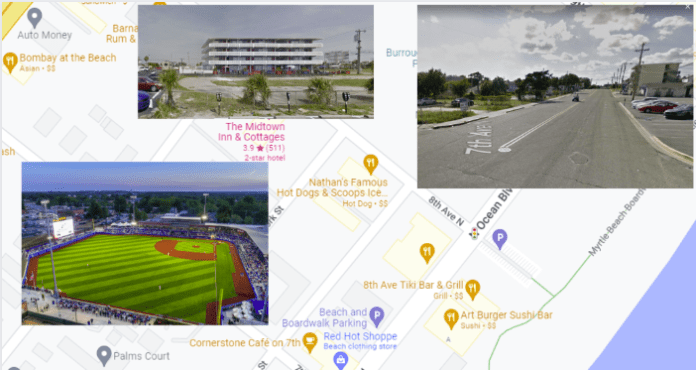 The City of Myrtle Beach has a dream concept for the land it recently acquired on the city square that runs from 7th Ave North to 8th Ave North. The city block runs west through Flagg, Chester, and Yaupon streets to Highway 17 business.

Initial talks with a group from Boston might bring a new Myrtle Beach baseball stadium to this formerly “run down” city block.

Since 2002 the average cost of a new ballpark at the highest level of the minor leagues (AAA) is $53 million. The lowest level of minor league baseball (rookie league) for a new stadium costs $8.5 million.

While the current Pelicans stadium is a Single A minor league baseball operation, the Pelicans use the facility about 40+ days annually.

Myrtle Beach hopes to use the facility the remaining days as a venue attracting concerts and special events. This desire will drive the price tag of the stadium upwards, more towards the higher range.

Negotiations between a Boston group of investors and the city include that investor paying for the construction of the venue, according to a key source inside Myrtle Beach city government who asked to remain anonymous.

The City of Myrtle Beach, however, is notoriously weak at negotiating in a way favorable to city taxpayers as can be exampled by their sale of Lakewood Campground at 50% off market price.

The city also has a checkered history on pulling off promised deals.

The proposed Coastal Carolina University deal between the city and the college is now considered on life support by those who work with the college’s new President Michael T. Benson.

In 2018, Myrtle Beach City Manager John Pedersen said that CCU was interested in purchasing the Encore Video building in downtown Myrtle Beach, a former theater. Pedersen has since retired. The University planned to use the facility for classes, as well as, theatre operations.

The area, formerly known as the Superblock, later added a Grand Strand Brewing Company restaurant. However, the area is still considered a hang out for the homeless. It is also in a high crime district.

Most parents have little desire to send their children from “out of state” into a college classroom surrounded by these high negatives.

MyrtleBeachSC News is now told the arrangement has a 30% chance of occurring.

The same might also be said for the newly proposed baseball stadium. Elected leaders and city staff operate more from a wish list than concrete goals as it relates to downtown redevelopment.

The dictionary defines a wish as: to want; desire; to long for. Goals on the other hand are defined as: the result or achievement toward which a well planned, organized effort is directed. The difference is profound.

The law of attraction states, “we attract who we are, not what we want.”

Efforts that include the goals of fixing underground pipe infrastructure, proactive policing, cleaning city streets, trimming city trees, and increased lighting in dark areas like Chester, Yaupon, and Flagg Streets would invite the types of investors the city only attempts to attract, without the necessary attraction factors of a safe, clean environment. Moving the 3,500 homeless population (currently inhabiting the city) to a new location outside the city limits, by providing a Street Reach-like facility in the Socastee area, would also help.

THE MIDTOWN AND BURROUGHS AND CHAPIN

For the Myrtle Beach baseball stadium wish to become a goal, the city would need to purchase the Midtown Motel from the Doyle family. The property is located directly inside the proposed city square. The city and the Doyles have been in preliminary talks, but have not been able to come to terms on a sales price.

Burroughs and Chapin own the adjoining property, once called the Pavilion.