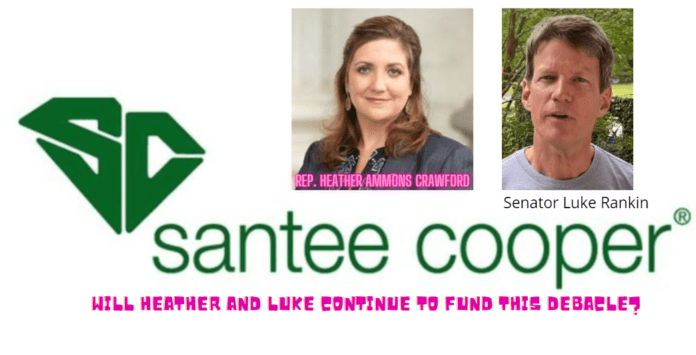 Is it a private business? No. Is it a publicly owned utility? That is questionable.

Regardless, Santee Cooper is a ship run aground.

After providing “million dollar buyouts” for the escaping former management team through golden parachutes, the organization finds itself needing funding once again.

The same cast of characters that got us in the mess will decide if the utility gets its hands on another $150 million.

It’s our money. It’s taxpayer money. What is another $150 million among friends?

According to Palmetto Promise:

2. How do state-owned Santee Cooper’s residential utility rates compare to the other large utilities in South Carolina?**

Answer: According to the South Carolina Energy Office, Duke Energy Carolinas has the lowest residential electricity rates in South Carolina among the largest utilities. These are for its historic territory in the Upstate (10.83 kwh). The rest are: Duke Energy Progress (11.96 kwh), Dominion Energy (13.02 kwh), and Santee Cooper (11.77 kwh).

3. Who will pay the $13.79 billion principal and interest Santee Cooper owes in total corporate debt?

Answer: as a state-owned agency not a publicly-traded company, Santee Cooper has only ratepayers to turn to for paying down debt (except for a small contribution from Dominion Energy after a ratepayer lawsuit).

4. When comparing generation across those same energy companies mentioned earlier, what is the percentage of Santee Cooper power generation that comes from coal?

Answer:  Generation from coal is 50%. The figures for the rest are: 24% for Dominion, 22% for Duke Carolinas, 16% for Duke Progress and only 2% for a potential buyer of Santee Cooper, NextEra Energy.

5. How many years will Santee Cooper customers and their children be paying for the V.C. Summer project and other corporate debt?

Answer: Santee Cooper’s total principal and interest owed is $13.79 billion. Amortization is through the year 2056, 36 years from now.

6. Lawyers for ratepayers pegged V.C. Summer costs at $4.7 billion. How much did ratepayers receive when the Jessica Cook et al. case was settled?

Answer: The 1.6 million plaintiffs got $520 million, but paid nine law firms $78 million. Net: $442 million. Part of that will come from Dominion Energy. The rest will come from Santee Cooper itself who will get it from… ratepayers.

7. According to economists at Clemson Economics Associates (CEA), for the period 2020-2029, Santee Cooper is expected to lose money. How much money is the agency expected to lose?

Answer: When losses are calculated using Santee Cooper’s own assumptions for 2020-2029, the total Santee Cooper operating income less debt service for that period will be -$525 million.

8. According to CEA economists, for the period 2017-2020, when compared to the other large utilities in South Carolina, Santee Cooper has been underfunding capital expenditures (CapEx) by an average of how much each year?

Answer: Dominion, Duke and NextEra spend on average 43% more on Capital Expenditures (“CapEx”) per year than Santee Cooper. Using the CapEx level for those peers, for the period 2017-2020, PPI has calculated that Santee Cooper has been underfunding CapEx by approximately $150 million per year. Scrimping on infrastructure—from power poles to generation upgrades—can be more costly in the long run and potentially dangerous.