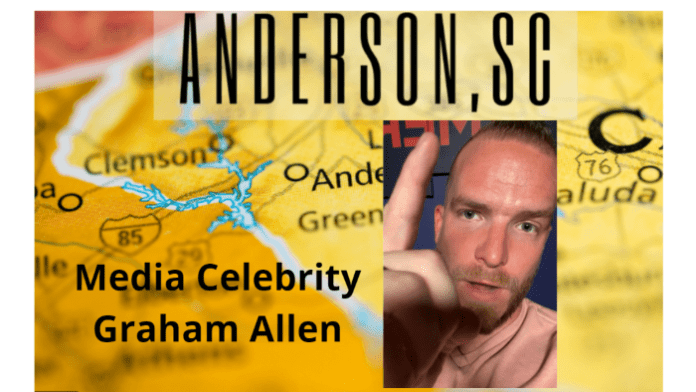 Allen recently moved to Anderson, S.C. from Georgia to run for this office. His 2021 Federal Filing looks as follows and lists him at 824 South Milledge Ave, Suite 101, Athens GA 30605:

However, researching state records, his firm received a PPP Covid Loan for $84,358 at an Anderson S.C address of 108 Archdale Way.

While Allen is not telling his 2.4 million followers he currently lives in Anderson, S.C., sources with his campaign state he has no intentions of ever moving into the district. Allen attends New Spring Church in Anderson, S.C.

We reached out to Chris Whitmire, S.C. Information Director of the State Election Commission.

Federal Law says the candidate must be 25 and live in the state. Allen is not required to live in District 7.

WHAT DOES HE KNOW ABOUT THE 7th DISTRICT?

Allen has a Facebook following of 2.4 million fans. His program is regularly featured on BLAZE TV. His fans are largely made up from a national following.

What does he know about the residents of Chesterfield, Dillon, Georgetown, Horry, Marlboro, Darlington, and Marion? Residents say they have never met him personally and he has never worked in any capacity in their towns or counties.

According to a 2019 article written by CoffeeOrdie.com on Graham: We live in a time when anyone with a smartphone can become a viral internet star. The technology is literally in the palm of your hand. Hit “record,” hit “upload,” and you’ve got a potential audience numbering in the millions.

Few people understand that power better than Graham Allen, a 12-year U.S. Army veteran who has made a name for himself with his “daily rant” videos on social media. In a little more than two years, he’s released dozens of videos, racked up over 1 billion views, and landed a show on Glenn Beck’s BlazeTV.

GRAHAM SAYS SC ESTABLISHMENT OUT TO GET HIM

In a livestream Facebook rant today, Allen says the S.C. establishment and big tech are out to get him.

MyrtleBeachSC News is certainly not the S.C. establishment. We question, however, if it is wise for Horry County residents to be represented by a man who does not wish to live in their district.

There are currently 16 candidates running for the S.C. 7th US Congressional seat. A Donald Trump endorsement will likely set one of these candidates apart from the field.