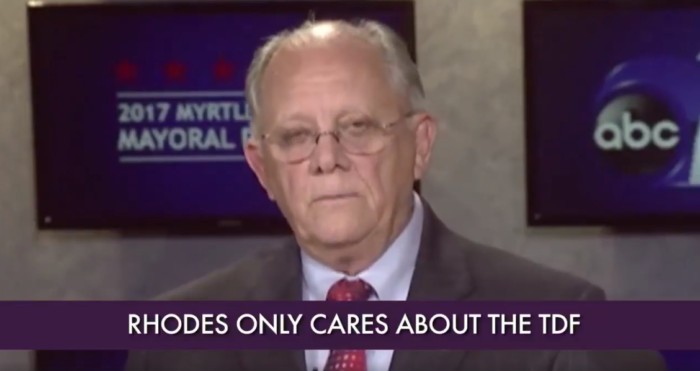 With tomorrow’s elections looming, another anonymous Facebook page has been created.  This time the hidden group went after Mayor John Rhodes calling him a Myrtle Beach Area Chamber of Commerce Puppet.

EDITOR’S UPDATE:  After MyrtleBeachSC.com sent an email to Facebook attorneys requesting the video be removed, the video was removed.

The page says he cares more about the TDF (tourist tax) than he does about crime.

This is the third such anonymous political page created this campaign season.

Columbia, S.C. based blogger, Will Folks of Fitsnews, took credit for creating the video mocking McBride.  Folkes refused to reveal the financial backers of that video stating he was protected under the PAC laws surrounding the U.S. Citizens United decision.

The video released yesterday was a direct assault on an unpopular tourist tax used by the Myrtle Beach Area Chamber of Commerce for advertising.  The tax is shrouded in controversy.  Candidates and residents believe the funds should be re-allocated directly into improving run down areas of Myrtle Beach,  policing Myrtle Beach streets, and fixing beach bacteria pollution issues on the city beaches.

MyrtleBeachSC.com notified (by email) the attorneys at the law firm Case and White, who represent Facebook, as we believe these pages, with hidden anonymous administrators and hidden funding, are unfair and unethical approaches to the election process.