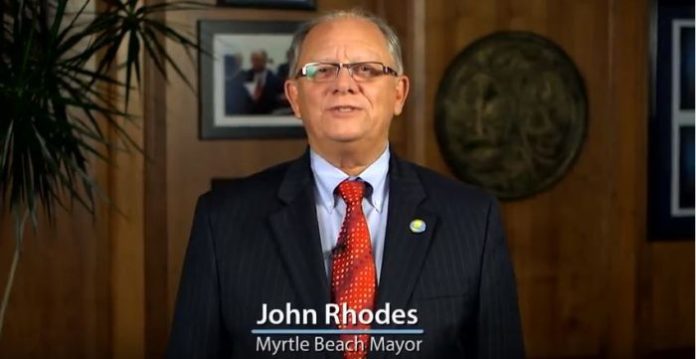 Last year,  about this time,  I was covering a story on Natalia’s Bar and Grill.

The business owner, Natalie Litsey, was being wrongfully shut down by the city of Myrtle Beach as the city wanted to purchase the entire Super Block for reasons still not fully explained.

I promised her I would pray for her.  As I did,  I saw many of the events of 2017 unfolding.  As I witnessed those incidents,  a picture of a tumbling John Rhodes rolling over and over as he fell came to mind.   I, unfortunately, interpreted that fall as a death.  I would share all of my premonitions with Natalie in an email that Randal Wallace would later release to Will Folkes for a news publication.

While all of these premonitions did come true,  my interpretation of John Rhodes’ fall as a death was wrong and I should not have shared it.  My apologies to our former Mayor.  These premonitions were never intended to be made so fully public.

Since so much has been made of these premonitions,  I am releasing the email entirely here: Email Written and Sent December 8, 2016

I am praying about your future as I type this concerning your appeal to city government.  It is not often I share with others about how God gives me supernatural downloads concerning the future.  I have shared this publicly only one other time with the MBACC Chamber president.  The prophecy I gave him actually happened in court this year concerning a ruling against the Beaufort Chamber.   He and his team have not yet experienced the ultimate outcome of that prophecy,  but it will happen.
He has not given me clarity about what will happen to Natalias,  but like Rahab of Jericho and Queen Hadassah (Queen Ester) in  their day,  it is not accidental that a girl from Honolulu is a part of this current drama.   Do not be afraid.  God has revealed to me that he does intend to bless you,regardless of what happens to Natalias. He is Lord.   Abandon yourself to him and his son, Jesus.   He is just now working all things out for your good, regardless of what the small local rulers decide.  He will hold those local leaders accountable for their governing.
These councilmen see you as insignificant and unimportant in their plans.   God sees you as significant.   He put the dreams and plans for the very location your shop holds inside of you.
Here is what I do know:
2017 is the year of God’s realignment.
I am telling you these things (that I never share publicly) so that you may know that GOD is Lord,  and not these local business leaders – nor these local politicians.
My own team will experience significant realignments that have already begun to take shape. I am not currently aware of how and who this is.   However,  I belong to GOD. My job is to bring his light into this community. I will never receive any glory for the work I have done nor that I will do.  God,  however,  will be glorified and made known through this work.  Myrtle Beach has a bright and important future just ahead.
What Jesus said of himself has also been true about me:   “A prophet is not without honor except in his own town, among his relatives and in his own home.”  In humility, I have died to the knowledge of this truth some long time past.
It is not me nor the words I have published online that these men rail against.   It is God himself they are fighting.   While they see themselves as “Good People”,  they have set up systems of protection for themselves that protect them from having to live by faith in God.  This, and the way they have treated those they govern  are their great sins.  They have put their faith in their donors, systems, and alliances without the consideration and inclusion of an all-powerful God in those plans.   To show them he lives and that he is Lord,  those very systems and alliances are just now becoming their own downfall.
GOD IS DOING THIS FOR THEIR GOOD as well as the good and future of this city.  Do not make great anything I am telling you.  God has known all of these things all along in advance.  He is simply giving me a small glimpse into his future.
While many will read these words and see me as a kook or false prophet,  I boldly state this so that those who do read this will know I said them in advance to show that God is Lord.  Only his plans and his will become realized.  Faith in him exceeds that of systems, donors, and dark alliances.
History,  Natalie,  is HIS STORY.  We all are just playing our moment in time in God’s Story.   Count it as joy that he has picked you for such a key role in such a key time.