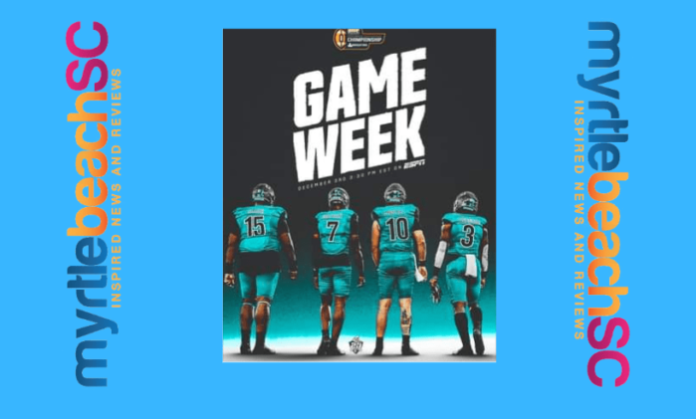 The Coastal Carolina Chants play Troy this Saturday at 3:30 p.m. in the Sunbelt Championship game. First contested in 2018, the game is typically played on the first Saturday of December.

The game will be played at Troy’s home field of Veterans Memorial Stadium in Troy, Alabama. The Sunbelt Championship game will be aired on ESPN.

The Troy Trojans come in as a 8.5 point favorite with Coastal Carolina losing its last game by over 40 points.

Troy has won its last 9 games. Troy stands at 10 wins with 2 losses on the year. CCU has a 9 -2 record. Each team commonly played Appalachian State with CCU winning their match while Troy suffered a 4 point loss.

Coastal Carolina’s star quarterback Grayson McCall is likely ruled out for the game. McCall has been absent since a foot injury in the Appalachian State game earlier this Fall.

Having their star quarterback out is going to continue to haunt this group. Junior Jarrett Guest started the last two games under center for the Chanticleers. Backup QB Guest (1 touchdown, 4 interceptions) will likely get the ball, but his struggles in limited action will most certainly give way to a run-heavy plan.

Troy has one of the country’s best defenses and they love their chances going up against an inexperienced quarterback on the other side. Additionally, Coastal Carolina is 1-5 ATS in their last six road games against a team with a winning home record, while the Trojans are 4-0 ATS in their last four conference games.

It’s an uphill climb, but Myrtle Beach area residents are hoping CCU can pull this one out.

Coastal previously shared a Sunbelt Championship title with the Louisiana Ragin Cajuns in 2020.

The Impact of Social Media on the Popularity of March Madness