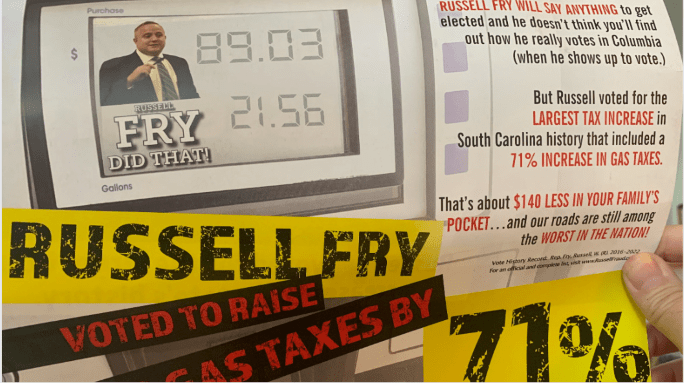 A mailer sent out by U.S. 7th Congressman Tom Rice claims Russell Fry raised your gas taxes by 71%. Is it true?

MyrtleBeachSC News fact checked the mailer. In fact, Rice is correct. As Majority Whip of the S.C. House, Fry did raise your gas tax by 71%. The measure was then vetoed by Governor Henry McMaster.

Fry then whipped up enough votes to override the Governor’s veto so that the gas tax would become law.

Like others on this list, Fry and Rice are equally Myrtle Beach Area Chamber of Commerce RINO spotas. What is a Spota? Spota candidates are always asking MBACC: Where I spota be? What I spota do? What I spota vote for?

What Kind of Congressman do we need?

A resident focused congressman will represent the people of the 7th District.

Why Richardson – A red wave of conservatives is needed

Let’s take back what’s ours….

Do we really need any more of this?