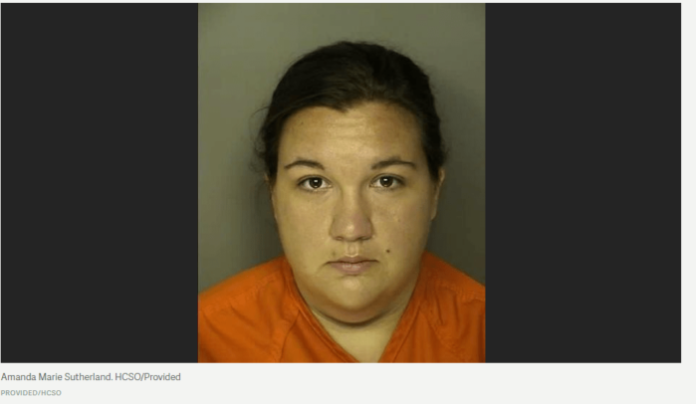 In a related article we published last year, Department of Social Services caseworker Amanda Sutherland was charged for misconduct in an Horry County Child’s death. Sutherland was booked into J Rueben Long Detention Center on July 6, 2021.

Sutherland is now being sued for depriving a father his parental rights under the 14th Amendment of the U.S. Constitution.

The lawsuit alleges that Sutherland lied, coordinated with Guardian Ad Litem Russell Hall, the plaintiff’s ex-wife, Sarah Price to create a false narrative which led to the termination of the father’s parental rights.

Sutherland, however, was a lower level case worker for D.S.S. Questions remain as to who at D.S.S. authorized her to create perjury via affidavit in a child custody case? Could Sutherland have acted alone?

We also previously reported on current Horry County D.S.S. Attorney Kelly Galley. Galley was booked at 1:04 a.m. EDT on Sunday, September 13, 2020 for Criminal Domestic Violence in the stabbing of her boyfriend. She was released on  a $1,000 personal recognizance bond. It was only later that her boyfriend (boyfriend’s body) turned up missing. His remains are suspected to be buried just across the N.C./S.C. state line, but no authorities have been able to confirm this.

Having no witnesses to her alleged crime, Galley remains as the lead D.S.S. Attorney for Horry County.

Past connections between Galley, Sutherland, Hall, Price and Price’s Attorney, Ryan Stamfle do exist, but no mention of a broad based conspiracy involving Galley is highlighted in the lawsuit.

The children’s private (sealed) records were put into public court filings by Price’s attorney, which caused them to be released to the public. Those court records, by law, should never have been placed in the court record.

As a consequence, those records were later used by S.C. State Senator Luke Rankin in a vicious political campaign for his re-election to office.

Amanda Sutherland, acting under color of state law as an adult protective services caseworker, violated the rights of John Gallman under the Fourteenth Amendment to the Constitution by depriving him of due process of law.

On September 3, 2019, Plaintiff discovered significant bruising on the inside of his 10 year old daughter’s thighs. Plaintiff had witnessed similar bruising over the course of the previous five weeks. The bruising concerned Plaintiff, who was involved with a custody dispute with his former wife.

Plaintiff contacted his attorney, Rhett Klok, and informed him of the bruises. Mr. Klok advised Plaintiff to take his daughter to MUSC Childrens’ Hospital to be examined by experts.

Plaintiff did take his daughter to MUSC and communicated his concern about the bruising and the location thereof.

At no time did Plaintiff accuse any person of physical or sexual abuse.

Despite two reports from Ciara Jones and HCPD, Defendant Sutherland told Plaintiff that she had never received any reports from anyone regarding Plaintiff’s daughter. This was a lie.

Both Ciara Jones and HCPD Officer Fletcher instructed Plaintiff not to return the child to the mother until the forensic investigation was complete. This is standard protocol in cases of possible child abuse.

Upon receiving these instructions from both Ciara Jones and HCPD Officer Fletcher, Attorney Klock sent an email to the opposing counsel and Guardian Ad Litem Russell Hall, instructing them that, pursuant to law enforcement, the child would not be returned until the investigation was complete.

Pursuant to South Carolina statutory law, Defendant Sutherland was required to immediately initiate an investigation based on the two statutorily mandated reports on September 3, 2022 and September 6, 2019. She did not do so. In fact, no investigation was initiated until the afternoon of September 9, 2022.

Upon information and belief, Defendant Sutherland coordinated with Plaintiff’s ex-wife (Sarah Price) and/or her attorney (Ryan Stamfle) to delay the initiation of the statutorily required investigation in order to appear as a witness at the ex parte emergency hearing scheduled for the morning of September 9, 2022.

Upon information and belief, Defendant Sutherland coordinated with Plaintiff’s ex-wife and/or her attorneys to provide an affidavit in support of the ex-wife’s ex parte emergency hearing to terminate Plaintiff’s custody. That affidavit contained false
information and openly advocated against Plaintiff maintaining custody of his children.

Upon information and belief, at the ex parte hearing initiated by Plaintiff’s ex-wife, the presiding court was told that the ex-wife did not know where her children were and that Plaintiff had kidnapped the child. This was absolutely false.

Upon information and belief, these statements were made with full knowledge of their falsity as Plaintiff’s ex-wife was notified through “Our Family Wizard,” opposing counsel as notified via an email from Rhett Klok, as was the appointed GAL, Russell
Hall.

Upon information and belief, the entire ex parte hearing was manipulated by Plaintiff’s ex-wife in order to schedule the hearing at a time when Plaintiff’s counsel was unavailable to appear and present the actual truth of the MUSC referral.

An ex parte order was filed on September 9, 2022 terminating Plaintiff’s custody based on the manufactured evidence presented at the ex parte, unrecorded hearing.

Once Plaintiff’s counsel learned of the improperly obtained order, he made a submission to the family court judge who immediately rescinded his order barring Plaintiff from
seeing his children on September 12, 2019.

READ THE LAWSUIT ON SCRIBD