Ed Carey, who was the Senior Construction Manager for the owner’s development team at Market Common, announced to all media his intentions to run for Mayor Of Myrtle Beach this November.

Carey is well-known locally for being among the most informed on city related issues. Residents and merchants consider him level-headed, highly intelligent, and with the key leadership skill of being able to build strong teams that competently solve problems.

Carey’s project at Market Common received high praise in that community. He is regarded as a man of solid integrity by all who know him. 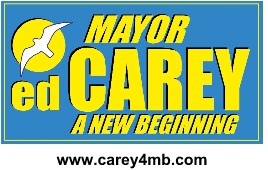 (Wednesday, August 2, 2017) — Ed Carey, small business owner and resident of Myrtle Beach since 2006, announced today his intention to run for Mayor of Myrtle Beach in the November 7th election. Specializing in development and construction project management, Carey was the Senior Construction Manager for the owner’s development team on the award-winning The Market Common project on the site of the former Myrtle Beach Air Force Base.

“I believe it’s time for sweeping changes in the leadership, structure and process of governing in this remarkable place we call home,” he continued. “The Number 1 job of government at every level is public safety, yet our City fathers seem determined to put all sorts of functions – many of questionable intent – in front of maintaining a safe, lawful community.  City Council is fixated on creating positive messages instead of creating a positive environment – one that supports residents and businesses and the millions of tourists who visit here every year. Their poor decisions have created an economic malaise at a time when our economy should be booming.”

“As principal construction representative of Market Common, it was my job to interface with the multiple City boards and commissions required for permitting and approvals, a process that is often far too laborious and unnecessary and worse, frequently subjective,” Carey noted. “For the last several years, I’ve attended scores of meetings as an interested citizen and as a professional frustrated that our City Government hampers private investment and growth with layer after layer of often superfluous rules and regulations.”

Carey plans to unveil a detailed program outlining issues and answers over the coming days and weeks.  Included among its key elements are detailed plans for dramatic improvements in public safety, reeling in excessive taxation and spending, full transparency, merging departments and functions to yield efficiency and reduce costs, term limits and establishing reasonable parking policies that protect residences and welcome County patronage.

He also believes that it is imperative that the City changes to single member districts to ensure that every individual and neighborhood is fairly represented.  Perhaps most important, he says, is his proposal for strict Term Limits – a maximum of two, four-year terms for both Mayor and Council. “Even the most talented and dedicated among us need to step aside and invite new voices with fresh ideas to the table.  Serving on City Council should not be a job but an honor.”

Carey, 59, is the father of two successful daughters.  He received a Bachelor of Science Degree (Building Construction) from Virginia Tech, College of Architecture & Urban Studies. He is a Certified Professional Constructor, has served as board member and Chapter President of the American Institute of Constructors (AIC) and also served on the Construction Certification Commission of the AIC.