EDC Board Membership Creates Issues For Eldridge And Council 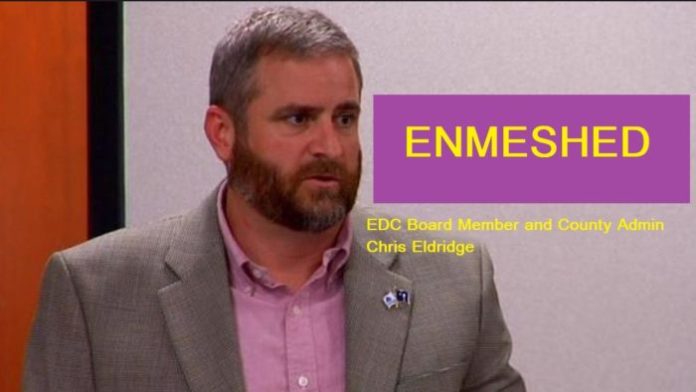 In a letter sent to all members of Horry County Council, County Administrator Chris Eldridge pleads for continuing in his job, stating ‘I have done nothing wrong’.

“I will not have my integrity attacked without means of defense in public,” Eldridge wrote. “I should add that this effort appears to have been initiated by some who are the subjects of what is being investigated. I have done nothing wrong to be punished in such a way. Doing so damages my career and makes me a target of retaliation.”

Eldridge’s role as a Myrtle Beach Regional Economic Development Corporation (MBREDC) Board member enmeshes the matter entirely, however. MyrtleBeachSC news asked Mr. Eldridge repeatedly through email: For the sake of the integrity of Horry County, AS A BOARD MEMBER OF MBREDC, we ask for the full release of the audio privately recorded by your MBREDC C.E.O. Sandy Davis.

Mr. Eldridge did not respond. We also asked to speak with him on the record about releasing the entire audio to the public. His response came through Kelly Moore, Horry County Public Information Officer:

NO PUBLIC DEFENSE? DAMAGING A CAREER?

The brief dialogue between Mr. Eldridge and incoming Chairman Johnny Gardner on Friday was highly professional. However, residents are clear about the very close relationship between former Chairman Mark Lazarus and Mr. Eldridge. Both men currently serve on the MBREDC board. It is unlikely that Mr. Lazarus’ tenure will continue on the MBREDC board now that he is no longer County Council Chairman. However, County Attorney Carotti’s memo states in detail about the ongoing participation of Carotti, Eldridge and Lazarus in the Davis recording episode.

ACCORDING TO THE CAROTTI MEMO: When Chris arrived, he, Gary, and Carotti went to the back, which was Sandy’s office, in which was a round table around which Neyle Wilson, Mark Lazarus, Chris Eldridge, Arrigo Carotti, and Gary Loftis sat around. Behind her desk was Sandy Davis, and seated in another part of the room was Sherri Steele.

After some brief remarks, Mark Lazarus began by saying that the $40,000 was discussed before the recorded meeting at the Bistro restaurant. And that the prior discussion was what concerned Sandy about the meeting leading to the recording. The $40,000 payment information is not on the recording itself per Carotti’s memo. That number was apparently told to Lazarus by either Davis or Steele, but Carotti’s email does not specify which of these two were having such conversations with outgoing Chairman Lazarus.

Despite his protests, if Carotti is telling the truth, Eldridge was highly involved in the Davis/MBREDC matter as it developed.

Confidential by on Scribd