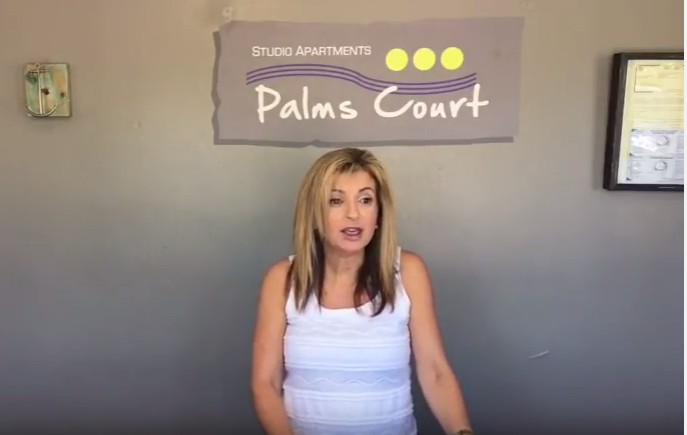 Managers, guests, and staff at The Palms Court Hotel, located in the tourist district of Myrtle Beach just mere blocks away from the Bay View Resort,  Sharkey’s Bar, the beach, and the oceanfront boardwalk say they have asked the city for help with crime in the area ongoing.

“It’s not just here, it is spreading all over the town,” said Michelle Cohen, owner of the Palms Court.  “We are really in a crime zone and something needs to be done,” she added.

Amanda,  who works at Palms Court said, “I believe a lot of leaders and the leadership that the police and the other agencies follow tend to put the blame on the merchants, the business owners and things of that nature claiming that they are not doing their job, that they are not screening and they are not checking backgrounds and things like that. It’s not true.”

At Myrtle Beach City Hall just miles away, the Mayor, City Council, and the City Manager addressed the Oceanfront Merchants Association. Elected leaders, including Mike Lowder stated they found items sold by merchants including t-shirts and cigarette papers offensive.  They said selling these items contributed to a downtown crime environment.

Elected leaders also suggested reducing two lanes of traffic in the downtown area on Ocean Boulevard from 9th Avenue North to 14th Avenue North, shrinking the road from a four-lane highway to two lanes only.  Some city leaders believe that this traffic diet will reduce crime in the area.

Michelle Kersimer, of the Oceanfront Merchants Association, told city council that making those changes would hurt downtown merchants.  “If you go online and just Google Myrtle Beach Crime Map, you get SpotCrime.com, which gives you a representation of the crime in the area from April 14th to April 27th which is the two week period we are discussing here today.  You can see that it is a city-wide problem.  You can tell that a lot of the crime happens in an area where a two-lane [reduction] process has already taken place. …that area [from 9th to 14th] is not the hotbed of crime that some other areas of the city are in,” Mrs. Kersimer said.

“The majority of people [who shop and park in downtown Myrtle Beach] come off of Ocean Boulevard.  They do not come off of Highway 17,” Mrs. Kersimer told Councilman Wayne Gray.

Charles Lockhart, a tenant, and worker at Palms Court told MyrtleBeachSC.com, “Our top police officers is no good.” Mr. Lockhart added, “The best tenant we have here has been beaten and they tried to rob him two times in the last two weeks. Something has to change. It’s not the police officers.  It’s the top,” Mr. Lockhart said.

Other merchants attending the downtown meeting stated that the Mayor and City Council had considered every possible contribution to the crime problem, but had ignored or been unwilling to look at themselves.  Those merchants also felt a large part of the problem with the city-wide crime should be assigned to top police leadership and city management.

At the Palms Court, management and guests pointed out ongoing crimes that were actually taking place in daylight just across the street as we interviewed them on camera.  We took our cameras outside and the prostitutes working the streets as well as a small crowd standing around working passing cars, quickly scattered.  Palms Court guests stated that if we came back later at night and hid,  we could catch those activities on cameras.

We did just that and recorded the above.   Merchants tell us Flagg and Chester streets are crime ridden.  Many have described those streets as a war zone.

After hearing from the downtown merchants,  elected leaders decided to leave Ocean Boulevard as it currently is with no reductions in lanes at this time.