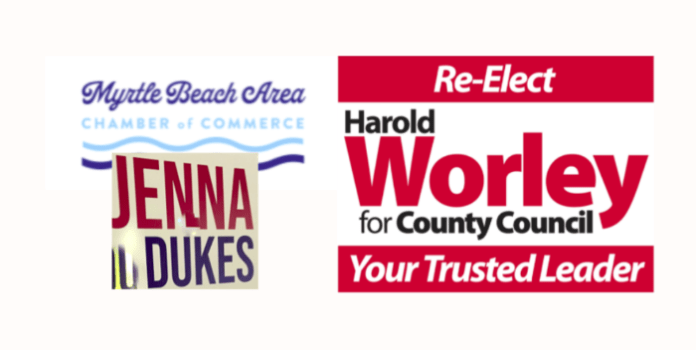 County Councilman Harold Worley announced his intentions to run for re-election this week.

As most of our readers know, this North Myrtle Beach County Councilman is among the most pro-resident candidate running in the June primaries.

As most of our readers also know, Worley was a key vote demanding that the State of S.C., as well as, the Federal Government commit funding for I-73 before passing a county ordinance that would require Horry County residents to fund the road. His vote infuriated the Myrtle Beach Area Chamber of Commerce. This despite the fact that the Myrtle Beach Area Chamber of Commerce had done little to secure funding from either the state or the U.S. government themselves.

In that regard, Benjy Hardee and other key MBACC allies worked to recruit local transplant and North Myrtle Beach pharmacist Jenna Dukes to run against Worley.

The MBACC team went to work raising Dukes approximately $95,000 this quarter. Click on the link here and then hit the contributions tab to see the usual list of suspect donors. Readers will see that Dukes raised large sums from Benjy Hardee, realtors, Brenda Bethune, and developers. Dukes also received two checks from the Chinese Golf Course group owners. It is supposedly illegal for her to collect from Chinese nationals.

As for Worely, he tells MyrtleBeachSC news, that he plans to self fund his campaign. Doing so allows him to vote his own conscience when it comes to representing the residents of North Myrtle Beach.

The key question for all Horry County residents is whether the Myrtle Beach Area Chamber of Commerce should be allowed by local residents to pick and choose who the chamber wants to serve on county council?

June 14th will be a decisive day when all area residents can decide how much power they wish to continue giving to what the Sun News recently called a “political juggernaut” for local government. As to recent history, the Sun News got this one right. MBACC has previously been the 800 pound political juggernaut in Horry County, as well as, state elections.

Let’s see how this one plays out.

Serving the interests of the people of the county over the desires of special interests has been a constant of Worley’s county service. He fought the use of county hospitality tax dollars for construction of Interstate 73, preferring instead the much less costly alternative of extending SC 31 to Interstate 74 in North Carolina to provide interstate access to the Grand Strand. Worley said the locally collected hospitality tax revenue was better spent on upgrading local roads and public safety needs throughout the county.

Worley consistently called for the introduction of impact fees on new construction in the county so the full cost of infrastructure and county services for new development would not be charged to all county taxpayers.

Worley has been a constant supporter of public safety services in the county fighting for increased pay and staffing in those departments to meet the needs of growing popular in the county.

Worley is often heard during council meetings urging his fellow council members to “Do the right thing for the people of Horry County.”

“The people of District One know me and know what I stand for,” Worley said. “I have always tried to put the needs of the people first over the demands of special interests. If I’m fortunate enough to be reelected to a sixth term in office, I will continue to do so.”