WRITTEN BY PAUL GABLE OF GRANDSTRANDDAILY

New information uncovered since our previous article on the campaign of House District 56 candidate Tim McGinnis unquestionably demonstrates the Myrtle Beach Area Chamber of Commerce was directly involved in ad buys for the McGinnis campaign from the beginning.

According to the public file of political broadcast documents associated with the McGinnis television ads, a proposal was prepared for the Myrtle Beach Chamber of Commerce scheduling television ads for McGinnis on WPDE television.  [SEE FORM ABOVE]

The proposal was approved September 25, 2017, by Jackie Miller of Miller Direct, a media marketing firm the Myrtle Beach Chamber uses for out of area marketing ad buys normally associated with funds from tourism development fee revenue.

Those ads began running on October 9, 2017, asking voters to “Vote for Tim McGinnis on October 24th.”

The National Association of Broadcasters political broadcast form (PB 18), filed with WPDE, again has Miller, on behalf of Tim McGinnis, requesting station time and certifying McGinnis is a legally qualified candidate for the House District 56 seat as a Republican in the October 24th primary. The requested station time is exactly the same as the above proposal. 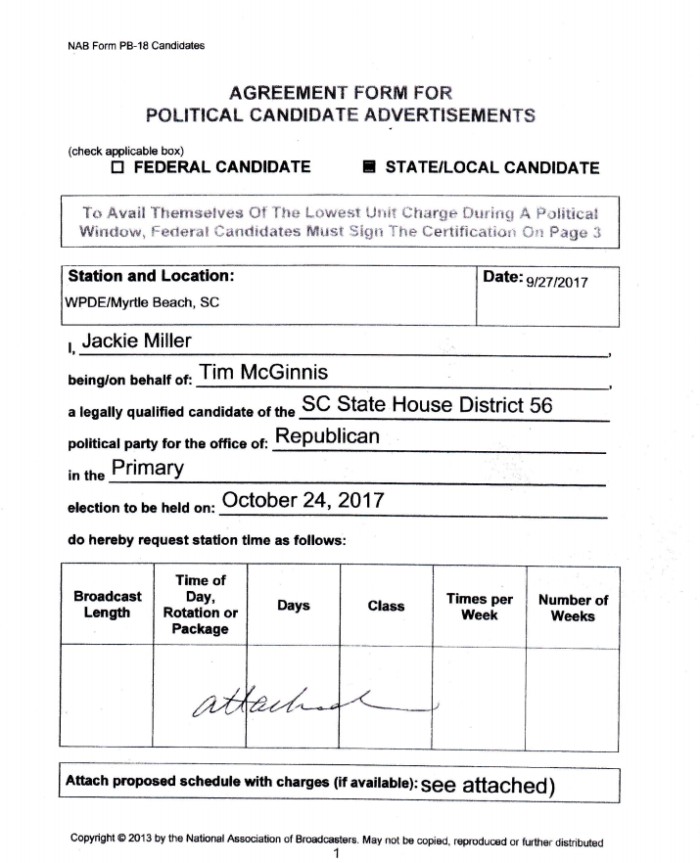 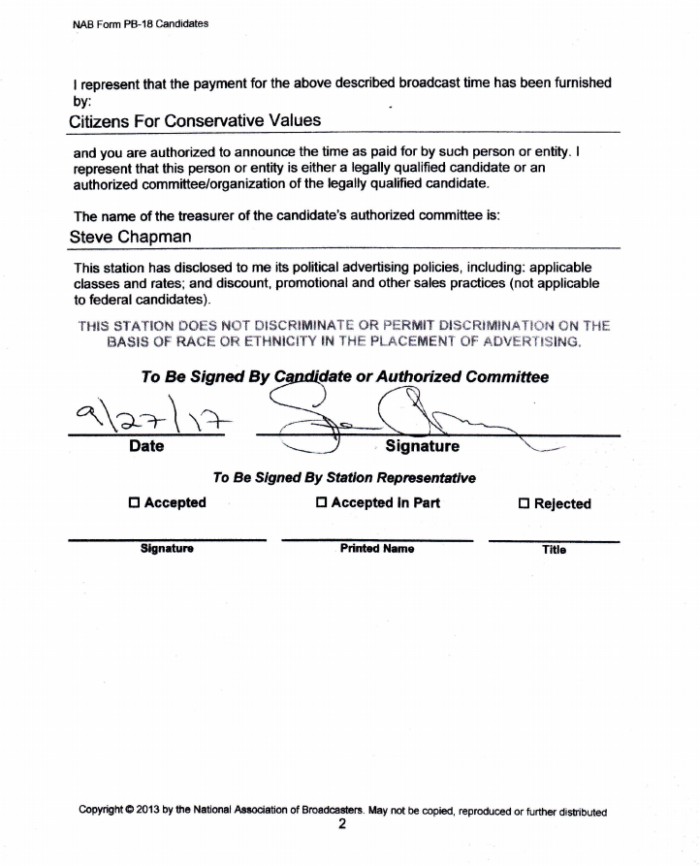 A two line confirmation printout was sent along with the answering email. The confirmation stated the $1,500 for the McGinnis ad buy was paid by an American Express card as part of an overall approval amount of $32,100.70. The confirmation noted the Sinclair Broadcast Group number 76799 with Miller Direct next to the number.

The confirmation appears to have Miller Direct paying an overall $32,100.70 to Sinclair Broadcast Group, which included the McGinnis ad buy. As noted above, Miller Direct makes many ad buys throughout the year on behalf of the Myrtle Beach Chamber for out of area marketing paid for with revenue from the tourism development fee.

Running the ad buy through a third party political action committee, such as Citizens for Conservative Values, would be a way for the Chamber to skirt state law individual campaign contribution limits to McGinnis.