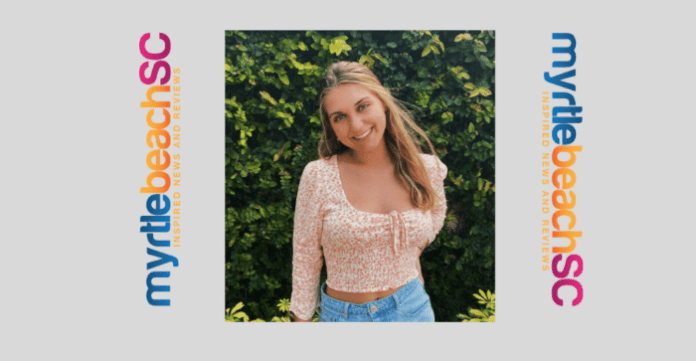 Furman Student Alexis Hidenbrandt, of Myrtle Beach, has been awarded an Emmy for her four minute documentary about “The History of Sweetgrass Baskets.”

In Charleston, South Carolina, an artisan weaves blades of dried sweetgrass into a beautiful basket, discussing the craft that enslaved people from West Africa brought to the Lowcountry plantations and that the Gullah community preserved through the generations.

Across the state, in Greenville, more than a dozen members of the Furman community discuss the pain of racism and the school’s efforts to recognize its history and create a more equitable future.

Both stories were filmed by student documentarians from Furman. And both documentaries were honored with Southeast Student Production Awards – otherwise known as the Student Emmys – by the National Academy of Television Arts and Sciences.

Hildenbrandt’s four-minute documentary, “The History of Sweetgrass Baskets,” won a Student Emmy in the Arts and Entertainment/Cultural Affairs category. It features interviews with two prominent Lowcountry basket-weavers, Nancy White and Kisha Kinard, explaining the evolution of sweetgrass baskets from utilitarian plantation implements to works of art, and how the craft itself is woven into the history of Charleston.

“I always was intrigued by the art of the sweetgrass baskets. I knew there was a deep culture; I just didn’t know all of the details,” Hildenbrandt says.

Harvin’s 30-minute film, “Race, Recognition and Reconciliation,” won in the Nonfiction – Long-Form category. It sprang from his attempt to understand the experiences of people of color in a primarily white university.

“I knew it was going to be hard, that some people might disapprove of the project, but I also knew that it was a story that needed to be told,” Harvin says.

The conversations he filmed included students, professors, coaches and administrators.