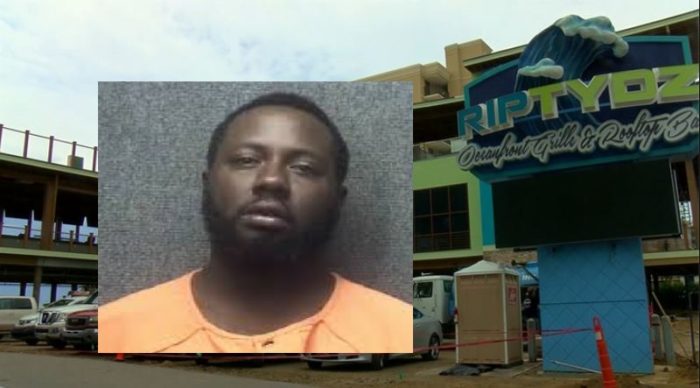 “Alcohol flows freely in Myrtle Beach. It fuels violence and crime, and local leaders refuse to acknowledge or address it. Today, there is blood on the hands of those local leaders who enrich themselves on alcohol sales, even as the city’s reputation spirals.” Tuvia Wilkes Myrtle Beach Business Owner

Myrtle Beach has its own, unique history for dealing with shootings.  On November 28, 2016, Natalia’s Bar & Grill and Pure Ultra Club, both located in Myrtle Beach’s downtown superblock neighborhood, were sent letters suspending their business licenses. A shooting that left five injured inside Pure Ultra in November of that year spurred an examination of bars and clubs across the city, as well as a mandated 2 a.m. closing time for superblock bars.  Myrtle Beach city staff recommended both locations lose their right to operate in the city.  No one died in this incident.  Both bars did lose their licenses.  The bars were closed by the city.

“I have been nothing but compliant to the law, I have the utmost respect for each one of you,” Natalie Litsey, owner of Natalia’s Bar and Grill, told City Council at the time. “Let’s be fair to the business people who are trying to do the right thing.”

Riptydz Bar operates in a newly created Overlay district in Myrtle Beach.  Mayor Brenda Bethune and City Manager John Pedersen pushed the ban claiming beachwear stores in the newly created Overlay District were selling “not family friendly” CBD oils and T Shirts.  Mayor Bethune said, “there are certain times of the year, and certain times at night that we have another element that’s there, and that’s what we need to take control of.” She stated the ban was necessary precisely because of CBD oils, T shirts, and “hemp laced” lollipops sold by these merchants.  Tests were done by the State Law Enforcement Division on the CBD oils and lollipops.  The city of Myrtle Beach has since refused to publish the results.

Yet on the Saturday of the shooting,  Myrtle Beach city arrest records show that sixty six percent of arrests were alcohol related. None of the arrests concerned CBD oil related substances. 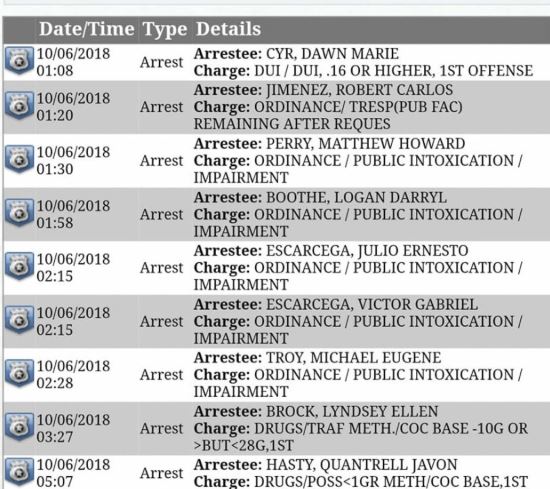 Six of the nine people arrested were charged with alcohol related crimes.

The city was quick to shut down Natalia’s Bar in 2016.  The city stated that the bar was actually the problem as it related to this crime.

This year, the city also hastily enacted a CBD Overlay second reading pieced together from a 2017 first reading completely re-worked.  Lawyer Reese Boyd firmly believed the recent ordinance should have been considered a first reading because of the many re-worked changes.  He raised those concerns at the Myrtle Beach City Council meeting when the ban was approved.

Yesterday, Mayor Bethune put up an emotional and effective post concerning her feelings about the shooter and the victim of the RipTydz Bar murder. 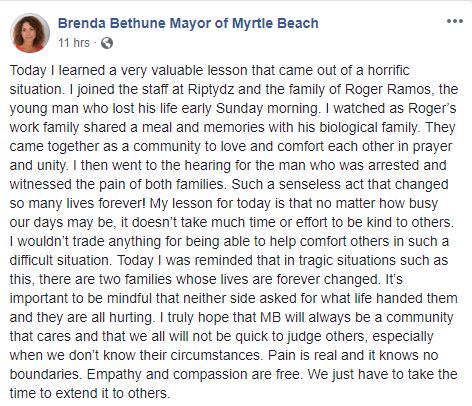 While the post was likely Ghost Written,  many elected officials do such. The post created a highly effective narrative.  In short, DON’T JUDGE.  In her post, Mayor Bethune states that neither side (neither the victim nor the shooter) asked for what life handed them.   The state will certainly hold Mr. Jakkari Jaquille De’Andre Brown responsible for his actions, regardless.

WILL THE CITY — USE THE SAME STANDARDS FOR RIPTYDZ?

MyrtleBeachSC news wishes no ill will on the Riptydz Bar.  The city, however, set a precedent for closing bars when shootings occur.  In the November 2016 incident,  the city believed the bar was the problem.  However, following posts by city leaders since Sunday morning, it appears that the city of Myrtle Beach believes Riptydz is a victim in these latest circumstances.

The problem, according to Myrtle Beach City Government, are these Myrtle Beach downtown ocean boulevard merchants.

The real estate, that these ocean boulevard merchants operate on, is some of the most highly desired real estate in America.  Laws, like the Overlay Ban, among other city practices,  have worked to keep the real estate values artificially low. Outside investors have not wanted to operate under such toxic municipal control and, as such, have made few offers on downtown real estate. Yet one DRC board member, Noam Pyade,  continues to buy up the land at outstanding market prices, often with owner financing provided by the current owner.

After Natalia’s was closed,  the following email was leaked to the press.

The email exposed that the city of Myrtle Beach intended to purchase the SuperBlock all along.  The city has largely done so since.

Riptydz is a city favored bar.  The owners have deep connections with elected office holders.

Said Tuvia Wilkes, an Ocean Boulevard Beachwear Store Owner,  “If Better Brands Inc. is a supplier for Riptydz, the mayor’s involvement represents a clear conflict of interest. The mayor risks a state ethics violation if she is involved in matters in which she has a financial stake.”  Mayor Bethune is an owner of Better Brands.  Better Brands is an Anheuser Busch distributor that holds the only licensed Anheuser Busch distributorship in the city of Myrtle Beach.

Added Wilkes, “Alcohol flows freely in Myrtle Beach. It fuels violence and crime, and local leaders refuse to acknowledge or address it. Today, there is blood on the hands of those local leaders who enrich themselves on alcohol sales, even as the city’s reputation spirals.”