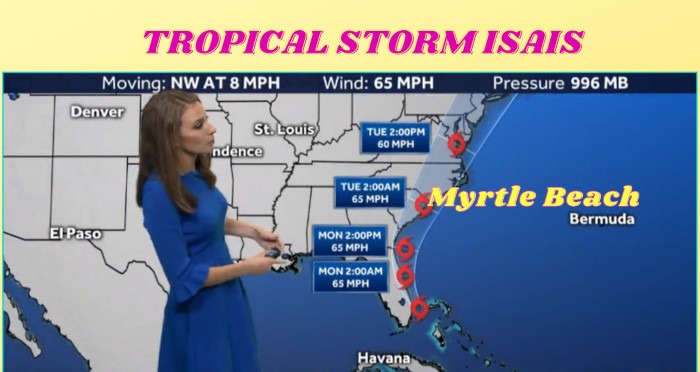 Tropical Storm Isias is expected to reach the Myrtle Beach area on Tuesday at 2 a.m. The National Hurricane Center predicts the storm will not strengthen back into a hurricane.

Heavy rains are expected which typically causes flooding in areas like Conway, S.C., Socastee, S.C. and Longs, S.C. Residents in those areas should monitor river levels throughout this first week of August.

As of 8 a.m. Sunday, Isaias was about 40 miles east-southeast of West Palm Beach, Florida and was moving northwest at 8 mph, according to the National Hurricane Center.

The storm has sustained winds of 65 mph. Florida’s east coast is a under a tropical storm warning and tropical storm conditions are expected to spread northward along the coast of Florida within the warning area through Sunday night.

Isaias is threatening Florida with violent winds capable of damaging roofs and buildings Sunday and destroying some mobile homes, according to the National Weather Service in Miami.

The storm will also dump up to six inches of water over parts of the state. As it treks along the coast, Northeast Florida and coastal Georgia will see up to three inches of rain.