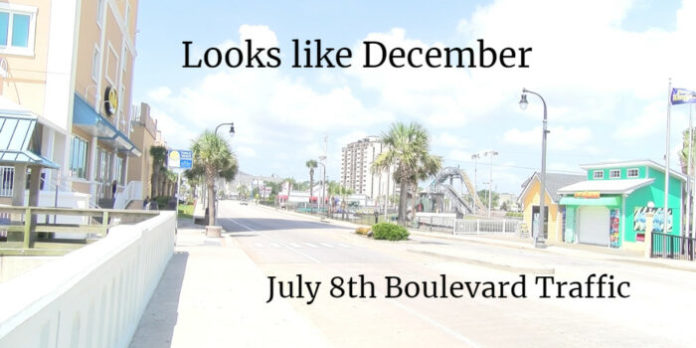 Vacancy signs were lit from the north end of Ocean Boulevard on 72nd all the way down south to where the boulevard meets Market Common.

Hotels in Myrtle Beach won’t fill up again until Thursday or Friday night, July 12th. The City of Myrtle Beach is now a 3 to 4 night budget, tourist destination.

How does that square with the reality of the TDF, tourist tax, being flat? TDF monies are 1% sales taxes collected by purchases in the city given to subsidize the Myrtle Beach Area Chamber of Commerce. The chamber is then given the task of promoting the city to ensure it stays full during the peak summer season. The TDF brings in $24 million annually.

The Myrtle Beach Area Chamber is tax subsidized $55 million in total annually to promote the city of Myrtle Beach.

If tourism is down, why are the tax revenues also not down?

Purchases from an exploding local population at Market Common make up the shortfall in “tourist taxes” for the city. Local purchases at stores, including Walmart, Taffinos, King Street Grill, Tupelo Honey, and more have helped keep tourist tax revenues flat through July 2019.

Should these, however, continue to be labeled “tourist taxes” as more and more of the revenues are paid for by local residents?