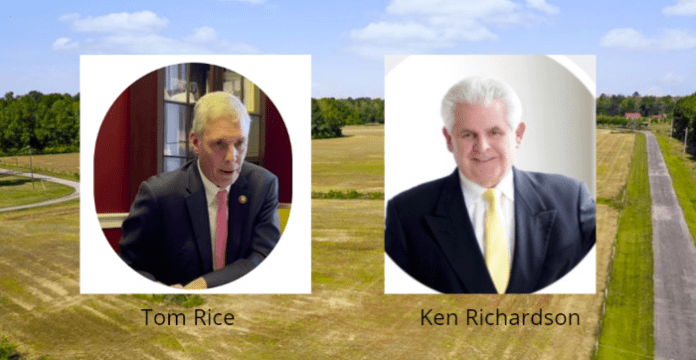 The June 14th primary is just under two months away for S.C. U.S. Congressional 7th. Financial disclosures were required by March 31st for all candidates who filed. They were published this morning at 6 a.m.

As we head into the homestretch, noting that a runoff is likely, Richardson and Rice lead the field in funding and campaign team organization.

We ask our readers to note, that some of these candidates have pre-purchased T.V. advertising and mailers to go out over the next 60 days. We reflect this in each candidate’s section.

Tom Rice has the most remaining cash on hand with $1.9 million, while Myrtle Beach resident Mark McBride falls in dead last with a negative $14,351.14 on hand according to his former campaign manager. McBride’s filings show that he has $3,714.99 on hand. However, Southern Pines Strategies reached out to MyrtleBeachSC News informing our team that McBride has an outstanding $18,066.33 in unpaid invoices as of February 2022 to that consulting firm.

Tom currently has $1,998,323.56 on hand. The majority of Rice’s contributions came from anti-Trump PACs.

Rice will work to get minority and Democrat voters out in Florence, Cheraw, Marion, Dillion, and Horry County to vote in these open primaries. Rice has very high negatives among 7th District conservative Republicans. Democrat “cross over voters” are his only hope to make the primary run-off.

His campaign is run by MBACC connected power player Walter Whetsell. The campaign has a good ground game with rumors of Democrat Jim Clyburn working behind the scenes in an effort to help Rice get Democratic voters out to the polls.

Ken has $273,562.42 on hand after pre-purchases of T.V. and Mailers. This prepares him for an extremely strong finish.

Horry County local Ken Richardson has among the strongest of volunteer leadership, with 120+ volunteers headed by Chelsea Anderson. He will do extremely well in Horry County. To make the runoff, Richardson will need to garner conservative votes in Florence, Marion, Dillion, and Marlboro County.

Ken’s strong, life-long ties to Horry County and his highly regarded reputation in the county are assets. Ken is well positioned to finish strong.

Richardson pre-purchased advertising and mailer materials. While these are out of his cash on hand balance, they have yet to be put to work.

Fry has skipped every Republican debate to date. Fry currently has $448,105.86 on hand.

MAGA voters have been sharing the picture above of Fry across social media. This in reference to Russell Fry choosing to skip the entire debate season to date.

His strategy of hiding from the voters may not have served him well.

Fry’s campaign anthem song of “Damn it feels good to be a gangster” was certainly a self inflicted wound. This likely hurt his fundraising efforts locally.

Fry will need to get “low information”, Trump supporters out to the polls. Those voters will likely vote for him simply because of the Trump endorsement.

Fry will also need to work to distance himself from his close ties to the Myrtle Beach Area Chamber of Commerce. (Click Link Here to see those deep connections).

A large portion of Fry’s remaining campaign cash will be used to establish a strong ground game of paid door knockers. Fry will work to get out the vote.

Primaries often have low voter turn out, however. Primary voters are also well informed. Each of these dynamics could cause problems for Fry. Most staunch conservatives do not believe Fry is truly a “MAGA” candidate at heart.

Voters that we have engaged describe Garrett Barton as a Joe Manchin like candidate. They say he falls more in line as a conservative Democrat who votes Republican. Barton has strong banking ties to Charlotte, N.C. which means he has the potential to raise funds quickly if needed. Like Arthur, Barton must perform well in Horry County. Barton’s volunteer (get out the vote) base is limited. We rate it as fair. Barton is looking for a key endorsement from a respected Horry County group.

$71,000 in remaining funds will create an uphill climb for Barton as Pro-Trump and Anti-Trump PACs flood the airways and mail boxes with messaging these last 59 days.

Barbara Arthur of Hartsville, S.C. has run a very smart, behind the scenes campaign. She will need to win over Horry County voters, however, to make the runoff. Horry County conservatives make up 51% of the total vote in the 7th District.

With $108,000 still in hand, Arthur has run a shrewd campaign, picking up a sizable following in Fry’s home territory of Surfside Beach, S.C.

While her volunteer base falls into the average category, she does have very committed workers. Richardson, Rice and Fry have greater campaign teams and more resources than does Arthur. She may also find herself caught up in the white noise created by more than one million dollars spent by PRO-TRUMP and ANTI-TRUMP “out of state” PAC MONIES.

McBride filed that he has $3,714.99 on hand. His former campaign manager disputes this claim. A Southern Pines Strategies invoice sent to our news team has McBride with a negative $14,351.14 on hand. As it always runs with McBride, every detail is a controversy.

McBride has only one campaign volunteer, yet he needs to canvass 350,000 homes in just 59 days.

McBride’s Bomb Throwing – Smear Strategy has failed in past elections. It appears it has failed him once again.

His “gimmick” campaign strategy specializes in throwing bombs on Facebook live. His most recent attempts garner him on average just over 200 viewers per broadcast. In 2019, the population of the U.S. 7th District was 740,536 people.

Of the 200 to 400 or so who view his rants, however, many live out of state. Viewers like Keith Vanwinkle and Shai David are just two common examples of out of state fans who follow his page closely. Less than 600 people follow his over the top messages regularly online.

McBride’s central campaign this cycle has been to run in opposition of our news channel. Yet we note, MyrtleBeachSC News can not be found on the ballot as one of his competitors.

As to the price tag of running, no one goes to Ruth’s Chris Steak House only to complain about the price of dinner throughout mealtime. Customers know the price when they enter the building.

Mr. McBride should have known the price of this effort, before he chose to throw his hat in the ring.

As to self funding, there is nothing stopping Mark’s wife, Laura, from contributing several hundred thousand to his campaign now.

Mark states this is his election to lose. If so, Mark should ask his wife to put her money up to finance that opinion. Laura is a highly paid Amazon.com management employee.