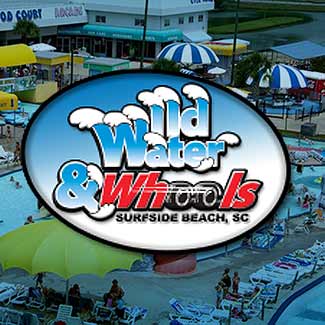 Just this week,  Chair Lazarus, was part of yet another ruling that closes all area helicopter rides for tourists wanting to view the beaches of Myrtle Beach,  unless those attractions promptly move themselves to the Myrtle Beach airport or North Myrtle Beach airport.  The Sun News of Myrtle Beach,  did note one key exception,  however.  As the Sun News reports:  Under the county’s ordinance, Helicopter Adventures near Broadway at the Beach has until 2023 to move their operations so that company can fulfill its lease obligation with Burroughs & Chapin Co. Inc.

As we have reported ongoing,  Burroughs and Chapin’s team members are campaign contributors to Chairman Lazarus and the impetus behind both the Myrtle Beach Area Chamber and the operations of the city of Myrtle Beach.   Just a few months past both Mayor John Rhodes and Chair Lazarus returned from China and announced a $100 million Chinese May 2016 investment into our area.  It was only after the announcement that locals learned of the Ponzi Scheme associated with Yiquian Funding of the previous $100 million Chinese Investment which was brokered by Rhodes and Chamber C.E.O. Brad Dean.

2 KEY PROBLEMS WITH COUNCIL CHAIR’S VOTE:
The vote that passed county council this week,  in most ways practically gives a corporate Myrtle Beach insider,   a special, if not complete standing in the market.
Secondly,  Lazarus owns an attraction himself.  Lazarus should have recused himself on a vote that put Myrtle Beach’s most popular attraction out of business?

The management of SkyDive Myrtle Beach, whose owner is  a military veteran,  provided our team with ongoing correspondence that showed:  Claims by Lazarus’  county team of  Landing Zone Infractions.  Skydive Myrtle Beach management say these claims were later not supported by the FAA nor the evidence.  These faulty claims were key components in the county choosing to close the popular attraction.  Newly minted, AD HOC minimum standard rules changed and written so as to put unnecessary operating burdens on these helicopter operators, as well as SkyDive Myrtle Beach.

County records show that the Chair has actually been billing Country Government for (services?) passes to his own attraction.

MyrtleBeachSC.com highlights the below bill sent from Mr. Lazarus’ attraction directly to Horry County.  Records show the bill was paid in full by the county. 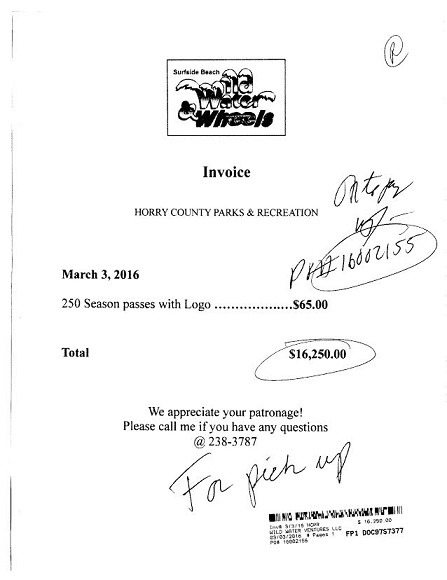 Even worse, County Law forbids a county official from voting on matters that he also has a conflict of interest in.

We have provided a copy of the section of that law below.

Why would Council Chair Mark Lazarus feel the county needed to spend $16,250 in water park passes?  Who else on county government thought this was a great idea?  Other Myrtle Beach Attractions are not afforded such inside consideration. 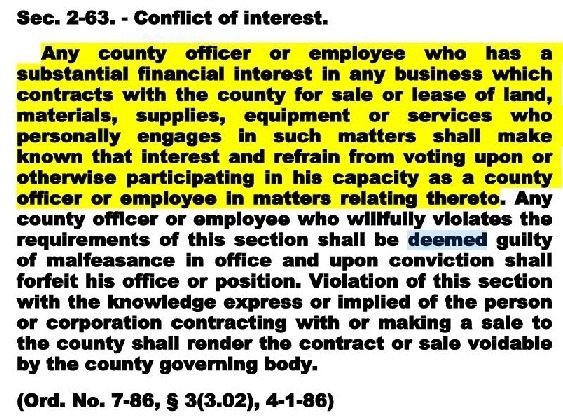 While attraction opportunities continue to be limited for area visitors,  local insiders also continue to monopolize on the financial returns of a limited market place.

2016 Tourists Expected Down By 2 Million Visitors