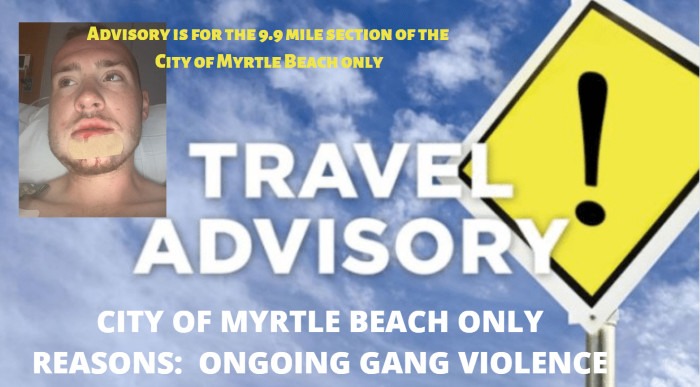 According to Deil, eleven black men jumped her boyfriend breaking his jaw in several places. The assault occurred in the downtown section of Myrtle Beach, S.C. on Ocean Boulevard near 16th Avenue North in front of the new Hilton Resort.

The mob also stripped Deil’s shorts from her body.

As many of you know, me, Colin and his family are all in Myrtle Beach for vacation. What started off as a great trip turned into one of the worst experiences of my entire life. 2 nights ago, on our 2 minute walk home from the beach, we were approached by some people asking to borrow a lighter. We told them we didn’t have one and went about our way. They attacked me. Colin tried to defend me, and ELEVEN black men jumped him. It was a short encounter thank god, who knows what more could have happened because they completely removed my shorts from my body. But in that time they managed to do all this to me and break Colin’s jaw in 3 places. He had a 4 hour long surgery yesterday and his jaw is now wired shut until further notice. I’m absolutely sick to my stomach. Bystanders recorded the incident and no one stepped in to help. Even the police refuse to release any information/footage because they don’t want to scare the locals. They are trying to call it a robbery, even though they did not take a single thing from us… If it were a black couple jumped by a group of white men, everyone nationwide would have seen that video.(Rightfully so) JUSTICE SHOULD BE SERVED REGARDLESS but because of the world we live in right now, these men are walking free and no one wants to help us. We are in contact with the Mayor and local news, but I’m afraid that won’t be enough. That same night just a few blocks away, someone was shot and killed. People need to know it is not safe here even though it is advertised as a safe family vacation spot. Thank you to those of you who have reached out already, we appreciate the love and support. It’s going to be a rough road ahead.

Officers inside MBPD say they are upset. They state the Myrtle Beach City Manager, John Pedersen, requested that any findings be listed and filed as a simple assault to avoid a heightened response from the public.