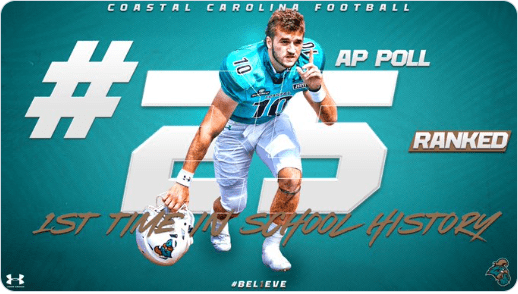 The Coastal Carolina football team made history on Sunday, Oct. 18, as the Chanticleers were ranked No. 24 nationally in the Amway Coaches Poll powered by USA TODAY Sports and No. 25 overall in the Associated Press Top 25 Poll.

The top 25 national ranking is the first for the Chanticleers in the program’s Football Bowl Subdivision (FBS) history (since 2017).

The Chanticleers were last nationally ranked in the top 25 in 2016 when they spent the entire season in the Football Championship Subdivision (FCS) STATS Top 25 poll while playing an FCS schedule and transitioning from the FCS to the FBS level.

ESPN analyst Scott Van Pelt predicted Coastal Carolina would be ranked this week. He was spot on.

The top two teams in the poll remain: Clemson #1 followed by Alabama #2

In other state news, the USC Gamecocks beat Auburn for the first time since 1933 this past Saturday.

It was an all around great week for South Carolina colleges.