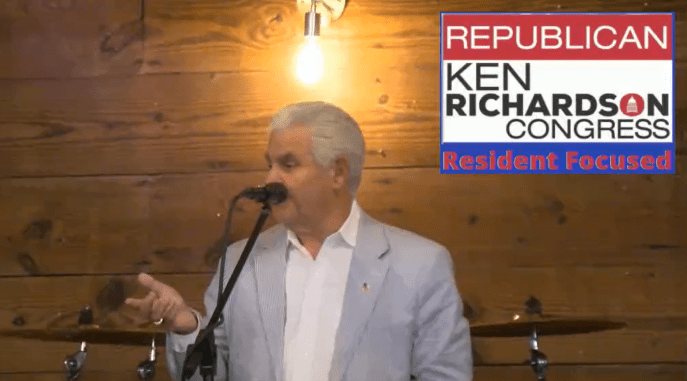 U.S. 7th Congressional Candidate Ken Richardson spoke tonight at the very venue where he sold peanuts by the bag on his bicycle as a small child.

No stranger to hard work, Richardson is a living testimony to the character and the tenacity of U.S. 7th District residents.

You can hear his entire remarks here:

He grew up in Conway, graduated from Conway High in 1972, and attended Horry-Georgetown Technical College. He has 25 years of service in the education community having served on the Coastal Carolina Advisory Board, the HGTC Board of Directors, serving as chairman for 16 years, and currently is the chairman of the Horry County Board of Education.

His ability to work with teams, build consensus, and solve problems are among his greatest assets.

Richardson was an outstanding quarterback for Conway High School. He was a youth football coach for 10 years, and was the 1978 Jaycee of the Year. He was the owner of Fowler Motors until 2009.

Ken’s ability to understand the finances of large organizations contributed to his business acumen. He served on the board of several automobile dealerships from 1991 to 2000.  He is a member of the board of directors of BB&T, Bank of SC.

His family includes his wife Donna, his son Jason, his daughter Christi (Robert Hucks) and his grandsons, Riles and Winn.

Local politicos are stating this is perhaps the most important primary election in the past 30 years.