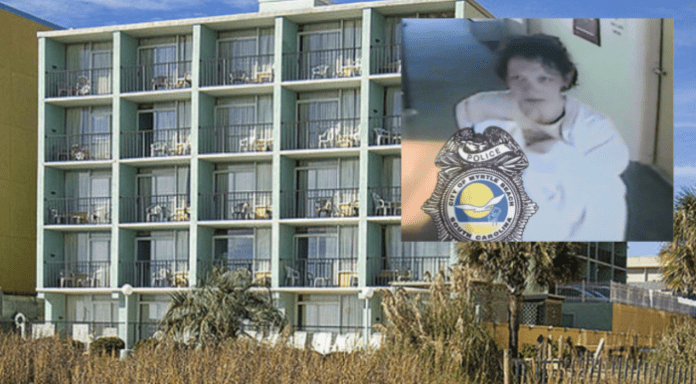 Myrtle Beach police are asking for help identifying a person who may be able to identify the perpetrator of a suspicious fire at the Montego Inn Oceanfront motel.

Officers were called on Sunday night to the Montego Inn at 1307 South Ocean Blvd in the City of Myrtle Beach. The police department received calls alerting them of a fire in the laundry room.

The Myrtle Beach Police Department posted a picture of a person who they believe may have information on what led up to the fire.

The Montego Inn sets adjacent to the Sea Mist Resort on the South End of Myrtle Beach. MyrtleBeachSC News continues to report about this area in general and the high crime rate associated around these properties.

Anyone who can identify the person, or anyone who may have information on the suspicious fire, is asked to call the police department at 843-918-1382 or call Detective Sweeney at 843-918-1486.

Crime areas like these will need to be addressed if the mayor’s hopes are realized.

ABOUT CITY OF MYRTLE BEACH CRIME

According to CrimeGrade.org, the City of Myrtle Beach rates a D-.

Crime Grade provides a rating from A to F using data compiled by FBI statistics to determine this grade.

The D- grade means the rate of crime is higher than the average US city. Myrtle Beach is in the 15th percentile for safety, meaning 85% of cities are safer and 15% of cities are more dangerous. This analysis applies to Myrtle Beach’s proper boundaries only.

Your chance of being a victim of crime in Myrtle Beach may be as high as 1 in 7 in the east neighborhoods, or as low as 1 in 43 in the southwest part of the city. See the section on interpreting the crime map, however, because comparing rates for crime or any other crime is not as intuitive as it may seem.

By a simple count ignoring population, more crimes occur in the central parts of Myrtle Beach, SC: about 1,843 per year. The west part of Myrtle Beach has fewer cases of crime with only 249 in a typical year.